I spent the morning visiting the loon family with two chicks in the Upper Valley area. Both chicks appear to be doing well, both are growing rapidly, are active and feeding eagerly.

The loons aren't the only inhabitants of their pond. This great blue heron was out and about a little before sun up. 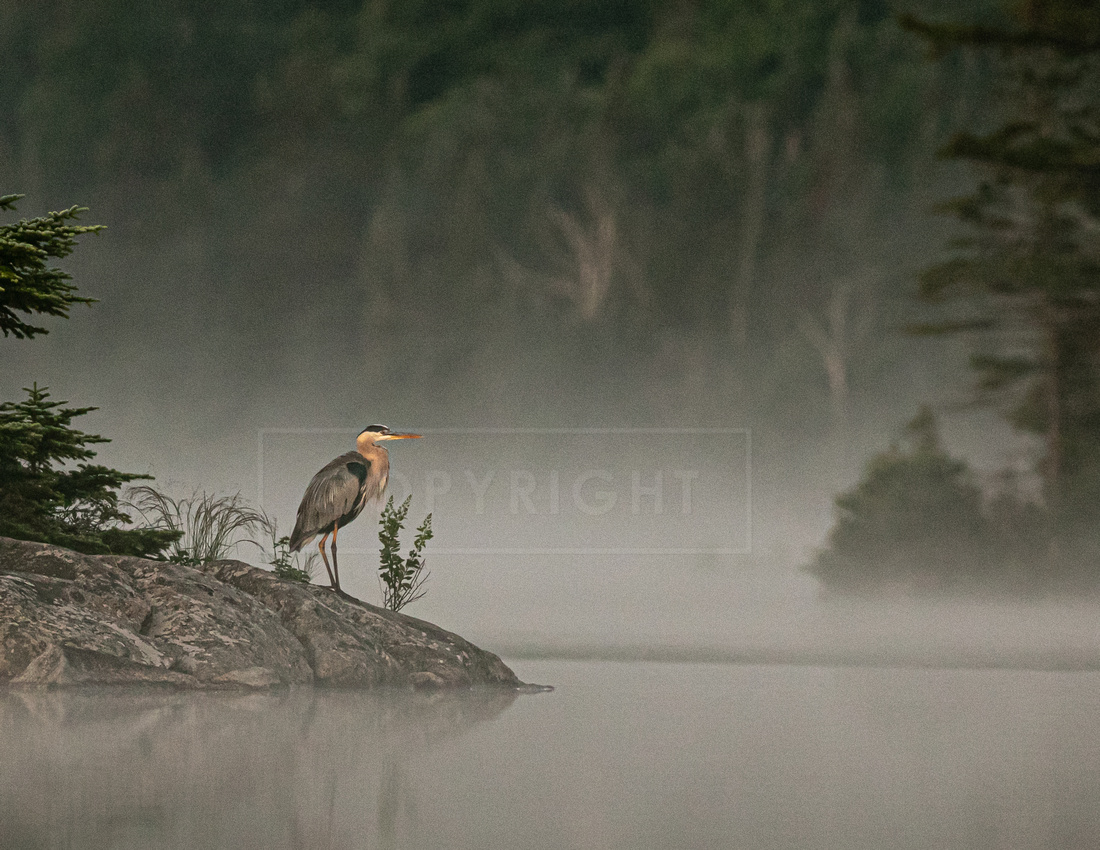 After the fog lifted, an osprey was up hunting for breakfast, and came to a hover almost directly overhead. Loons appear to differentiate osprey from other raptors at long range. Hawks and eagles are met with cries and the chicks flatten out to hide. But, the loons pretty much ignore the osprey (whose diet is almost entirely fish). I got some nice osprey shots back in May, if you missed that post, take a look at Osprey in Maine. 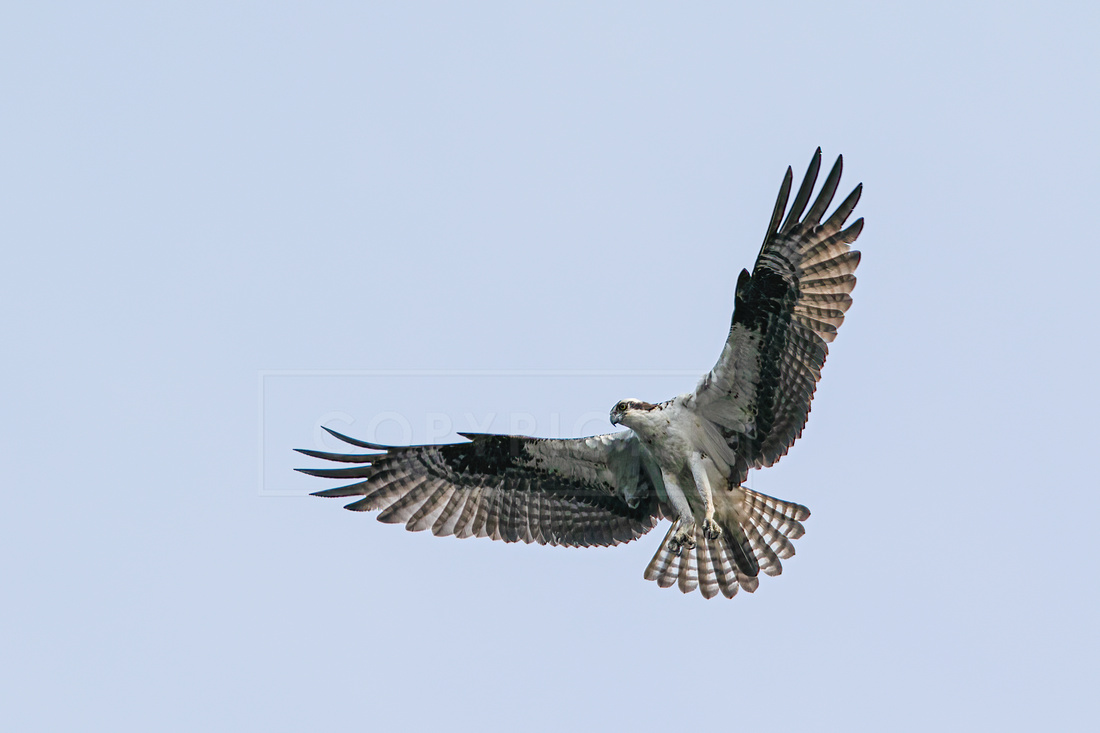 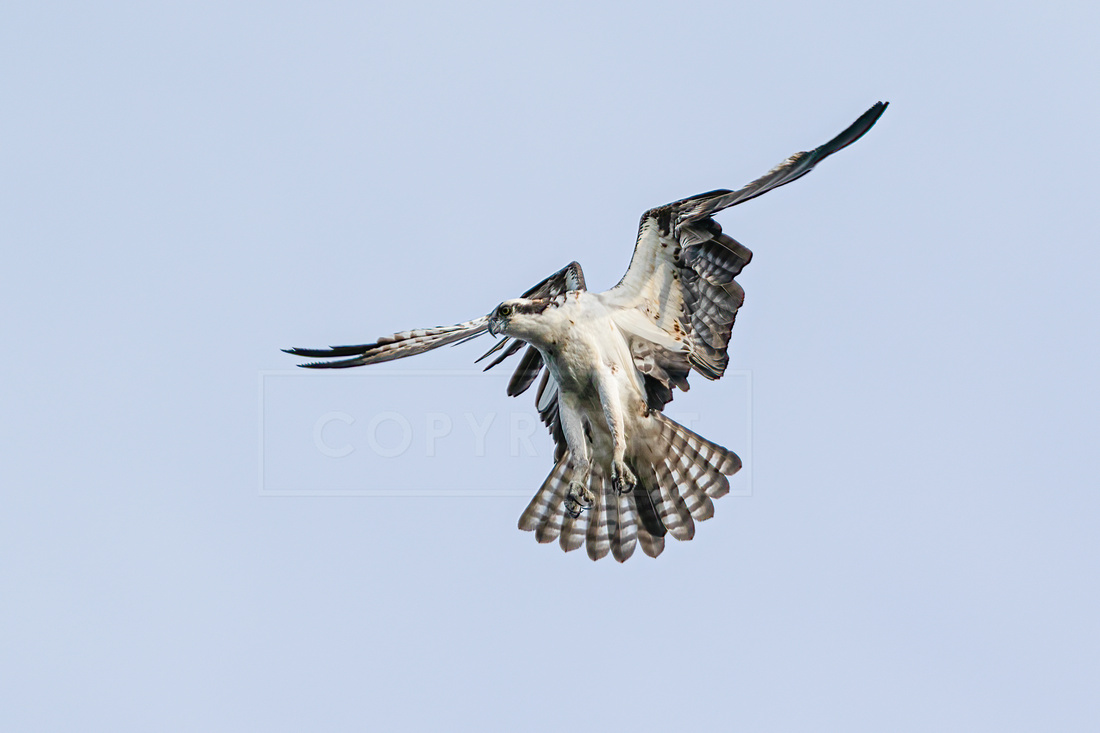 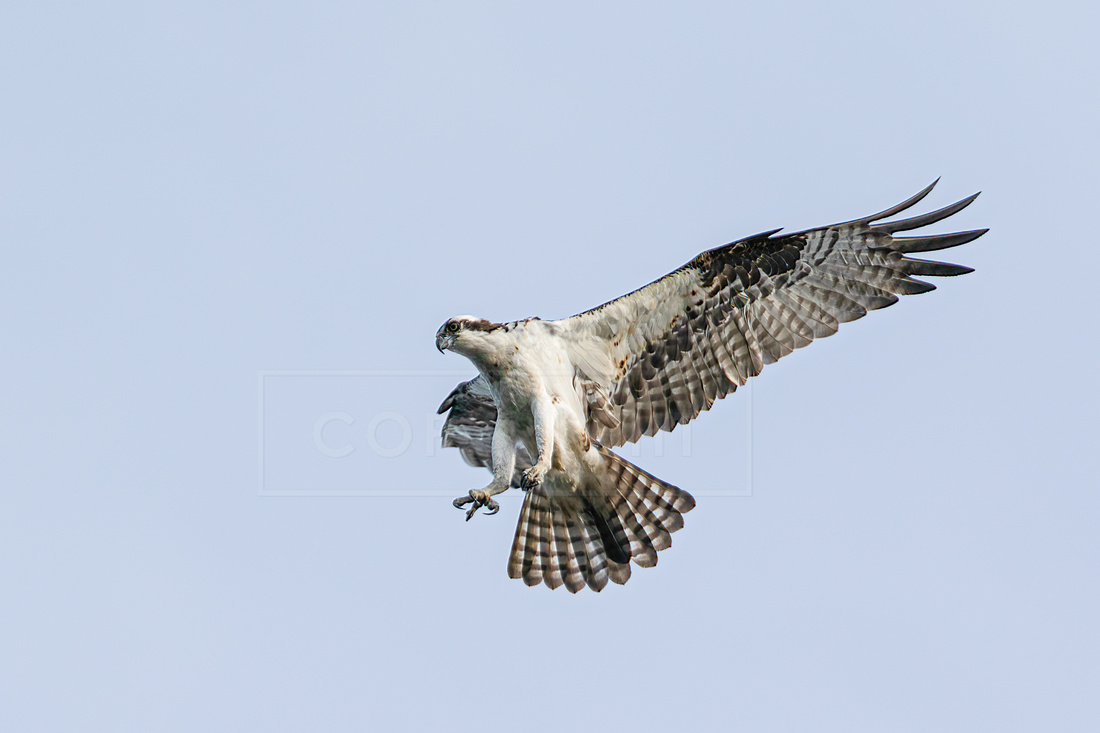 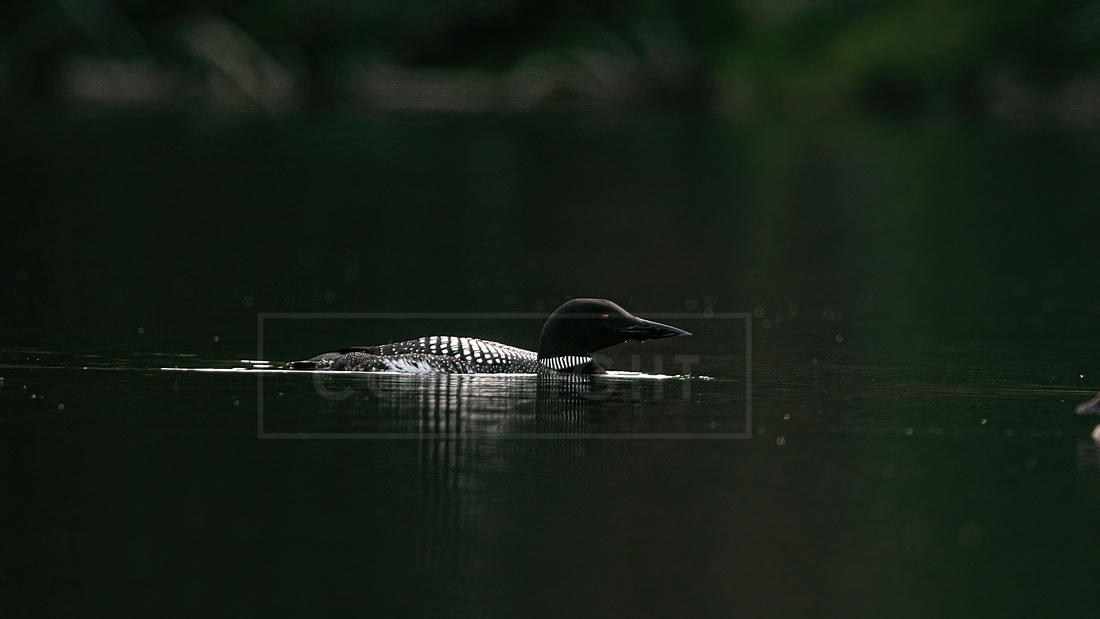 One of the adults stretching. I think this is our banded loon. The Loon Preservation Committee banded a bird with this combination of bands at Lee's Pond in Moultonborough, NH, in 2015. The weren't able to determine the sex while banding (I'm betting this is mom - the other loon is clueless about dealing with the chicks). It was spotted on Lake Tarleton in 2015 and on the current pond since 2018. 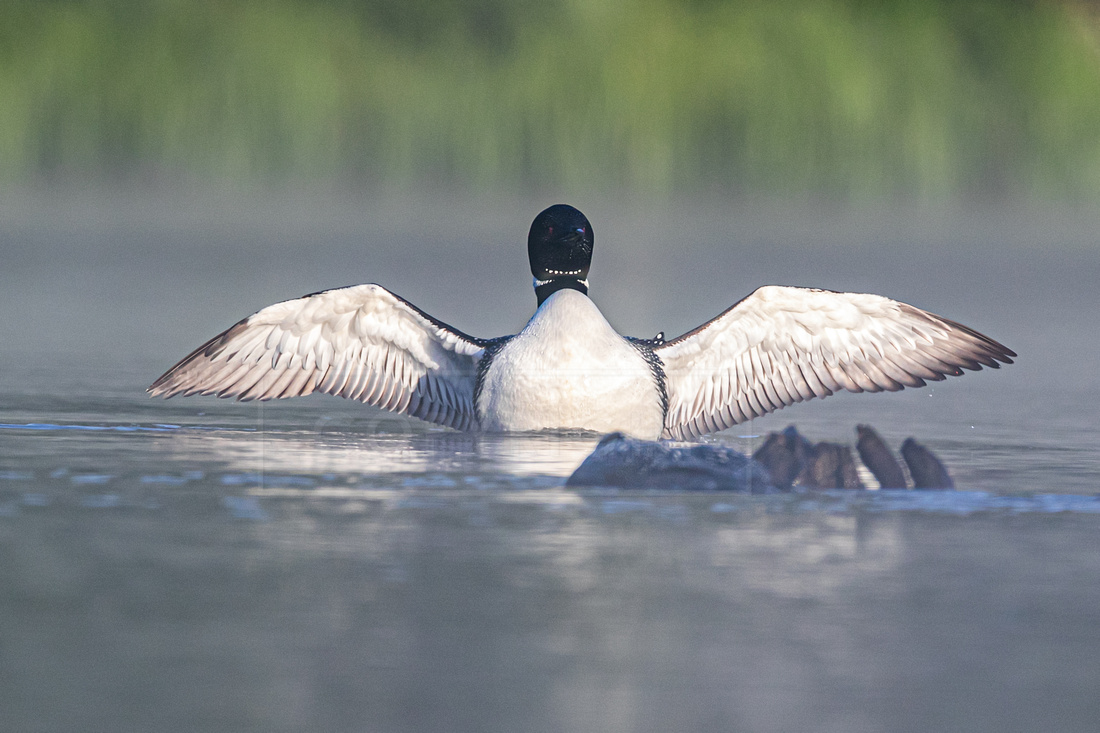 This pair of adults seems particularly fond of crayfish for feeding the chicks. They delivered several large crayfish early in the morning. 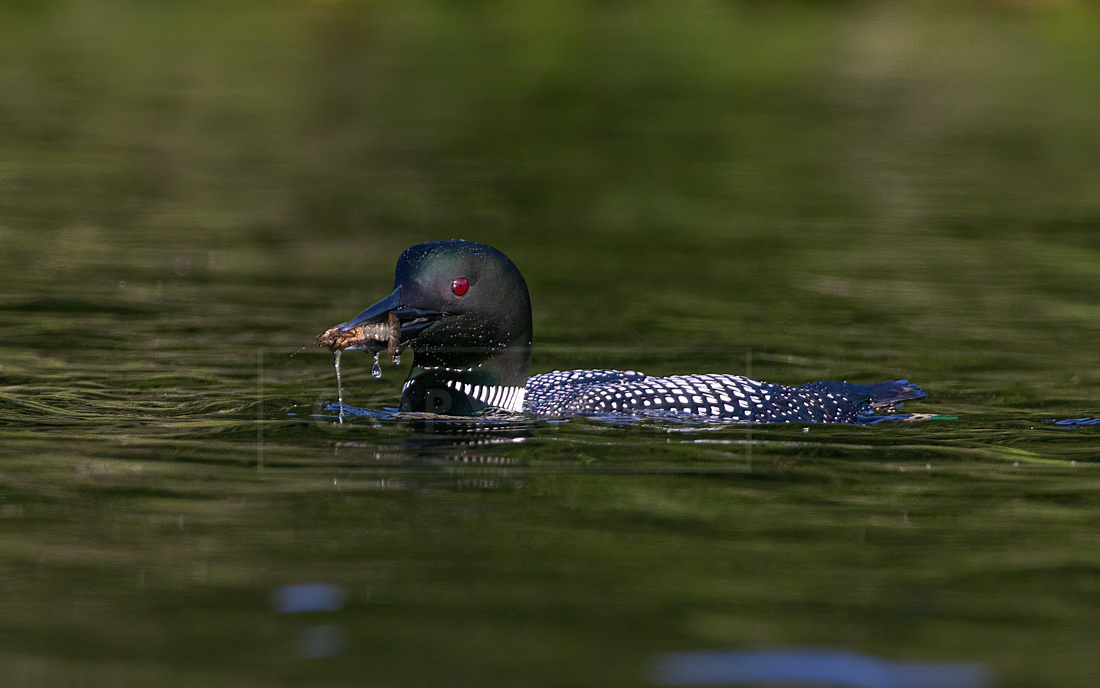 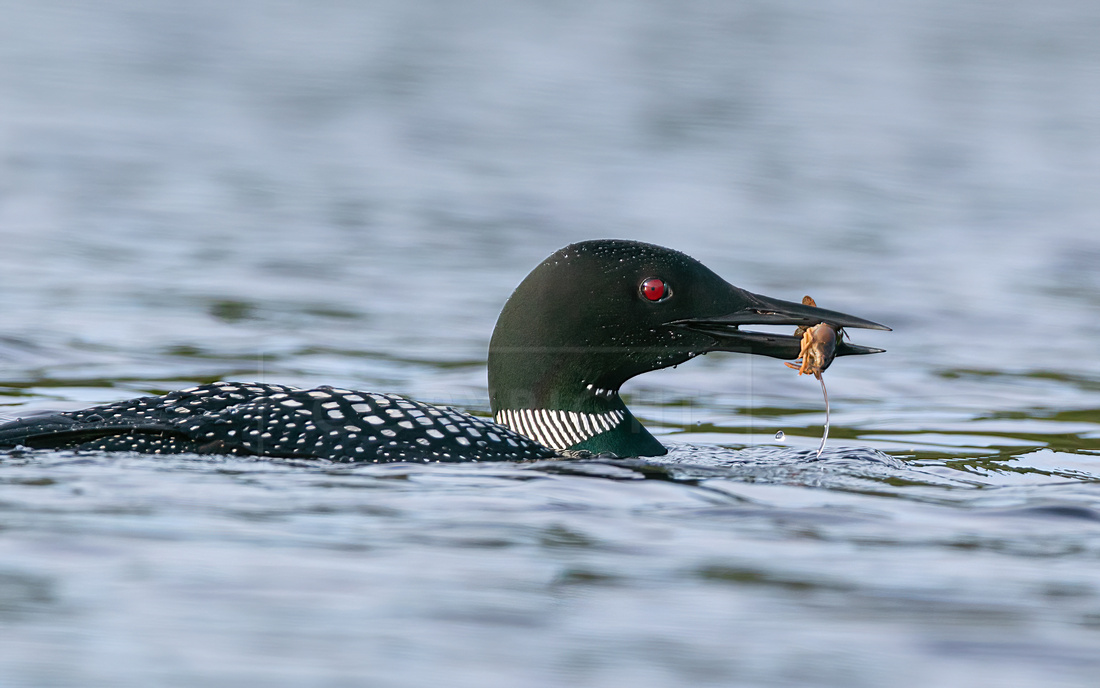 This chick has learned to toss the crayfish up to grab it tail first for easier swallowing. 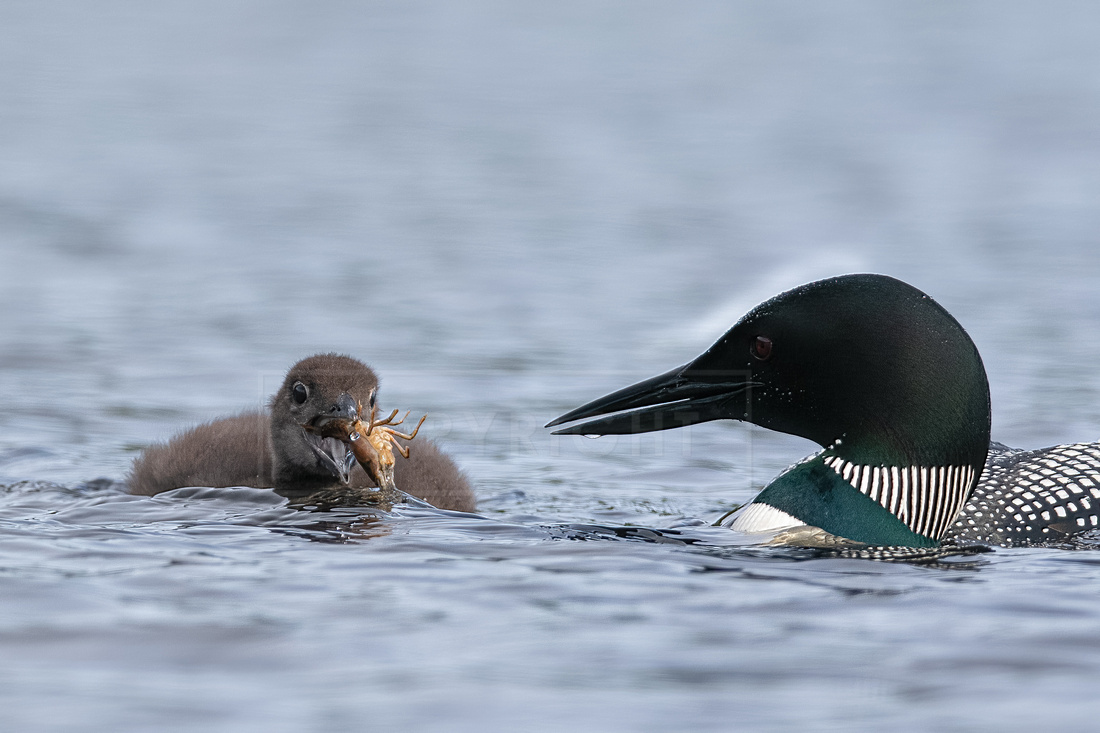 After the first feeding, there was a break while the parents preened and the chicks napped. One of the adults swam close to my boat to preen. I got great views as it cleaned and oiled its feathers. (And, 'close' is a relative term, these were with an 800mm lens and cropped.) 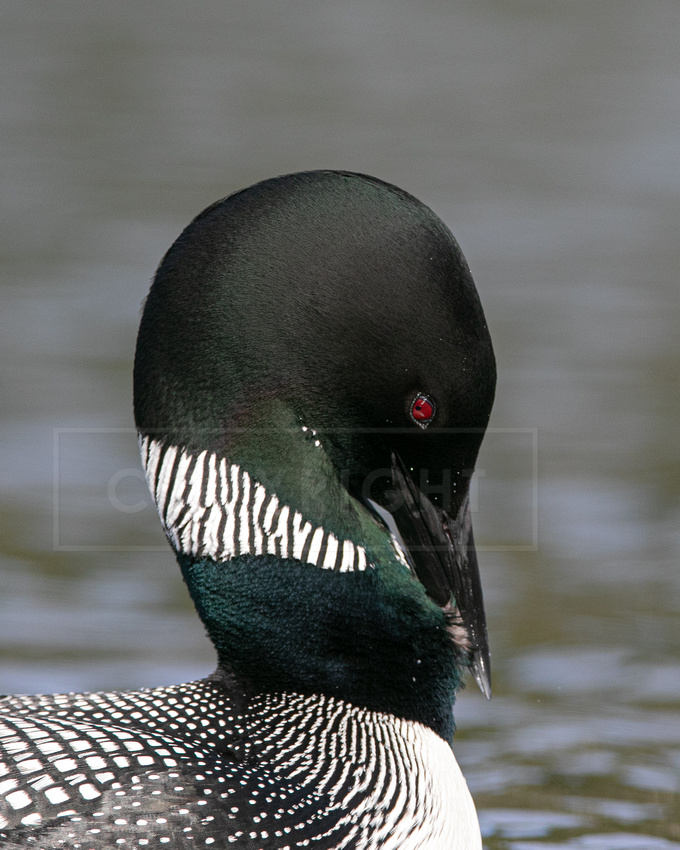 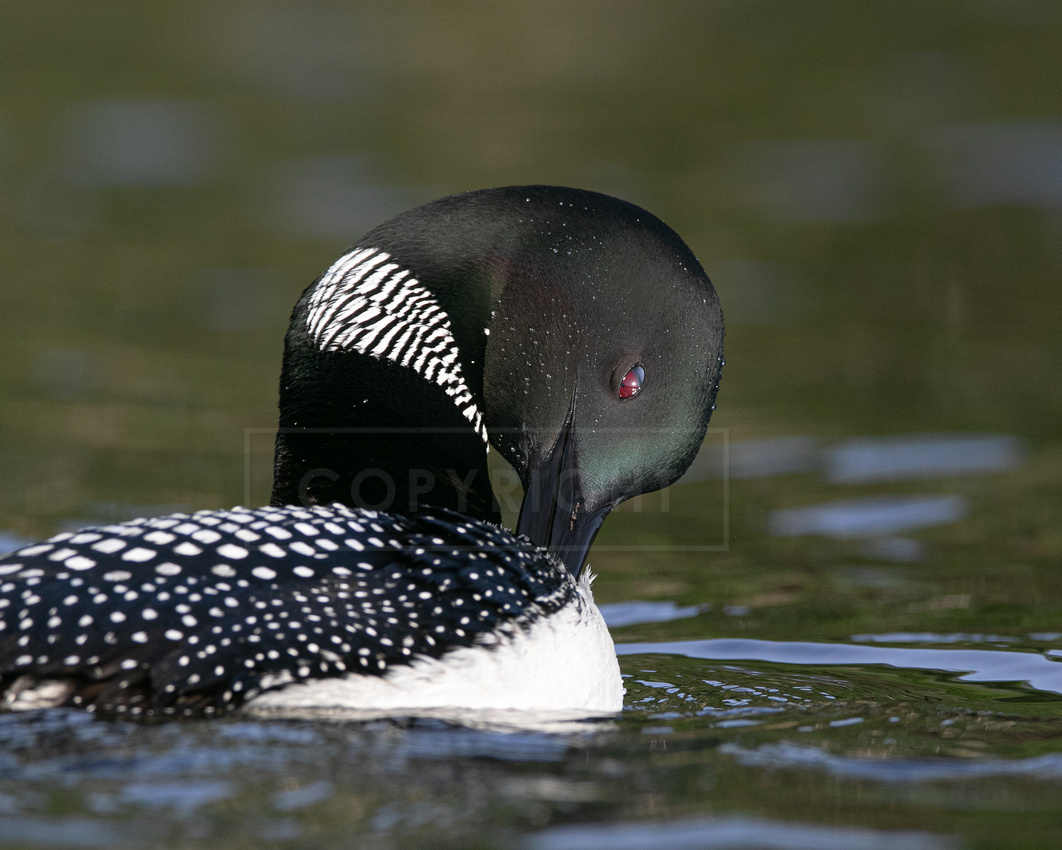 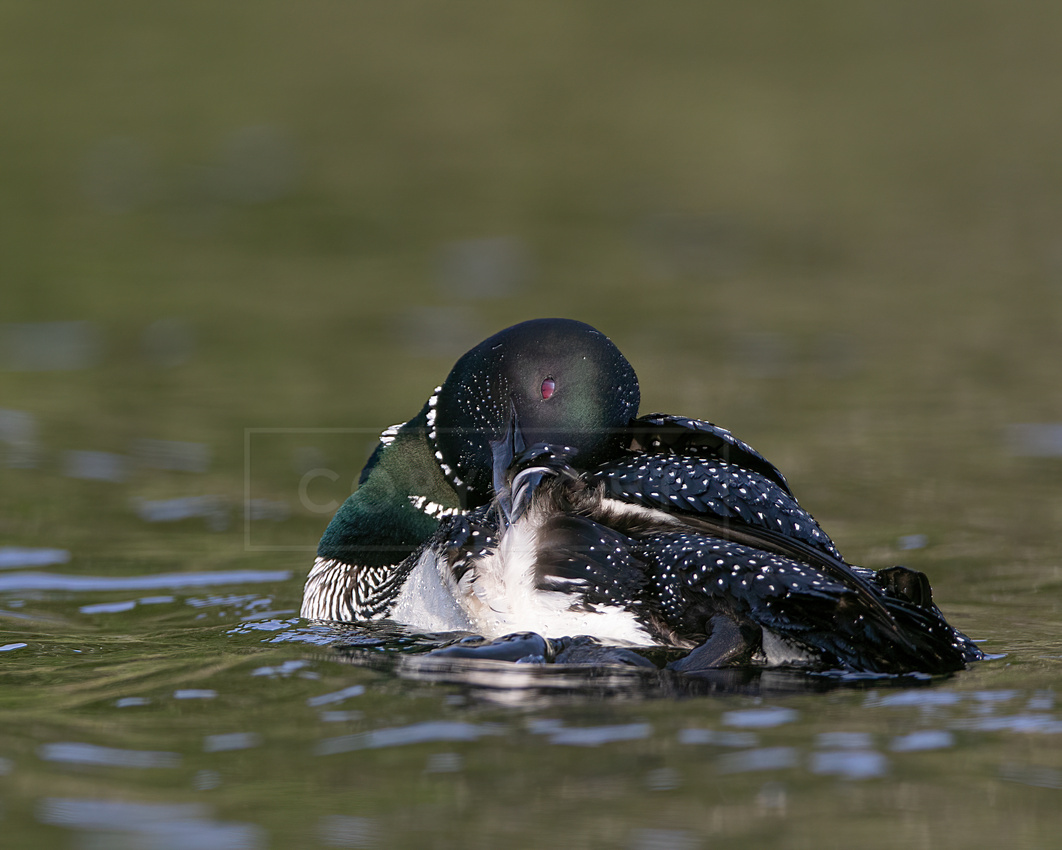 Feathers adjusted, time to give them a fluff and check to see if they're repelling water.

The family spent most of the morning in shallow water, with the chicks practicing diving and foraging. It will be a while before they can feed themselves, but they've started learning. This guy made a successful dive and managed to catch a stick. Sticks apparently do not make good snacks. 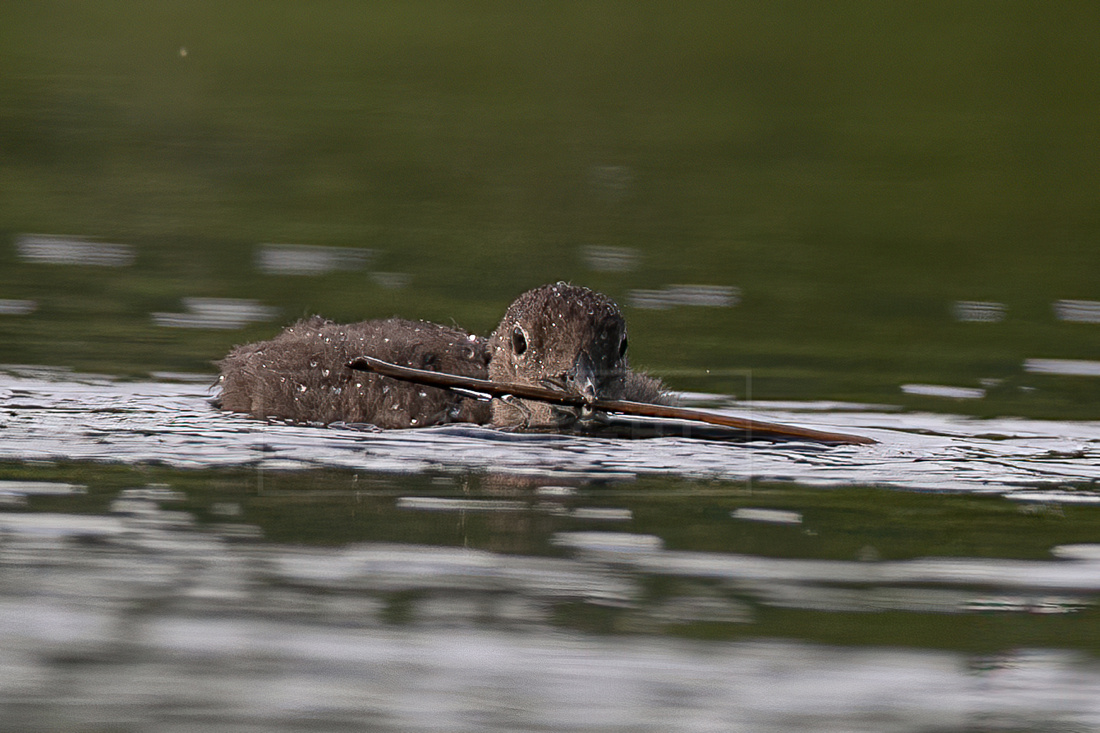 The parents eventually got serious about feeding the chicks and started bringing in fish. 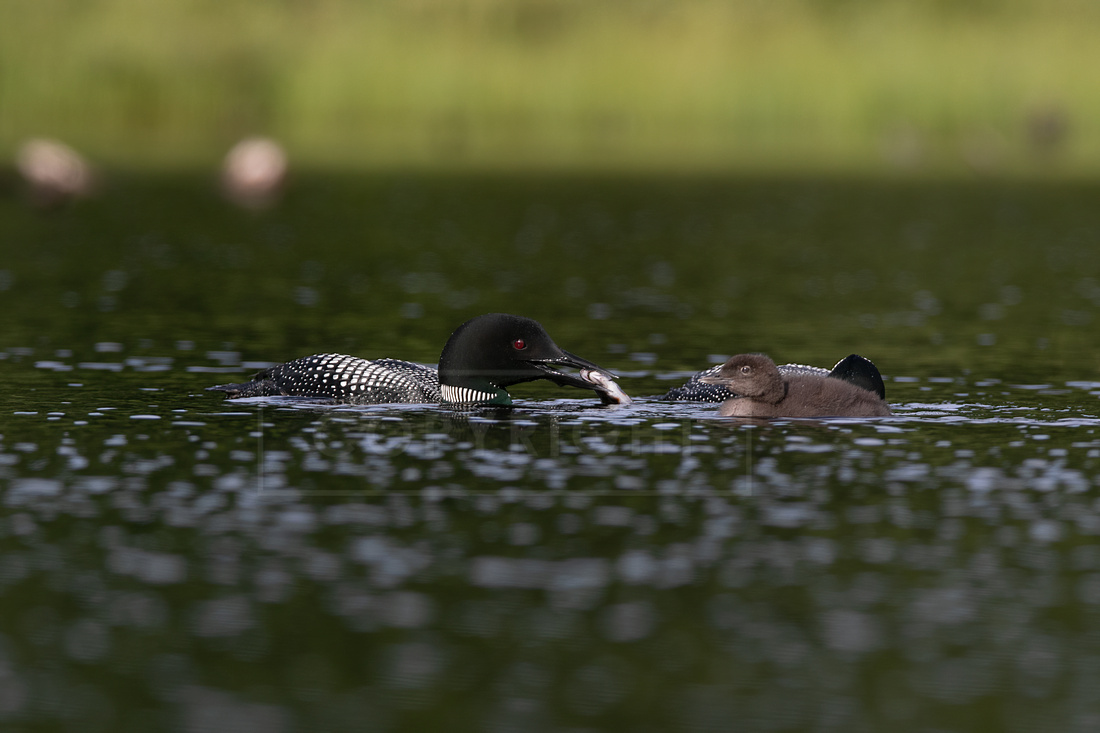 Adult loons seem unfamiliar with the concept of volume. They brought in fish that appeared way too big for a chick to swallow. This little guy was up to the challenge, but had to work at it. 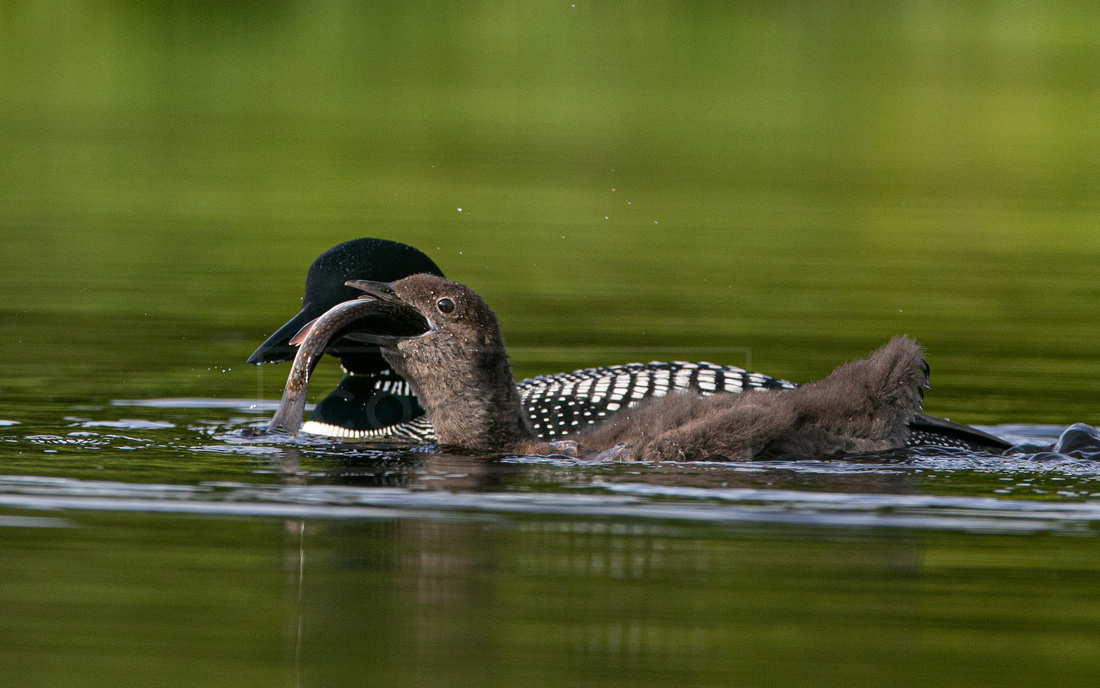 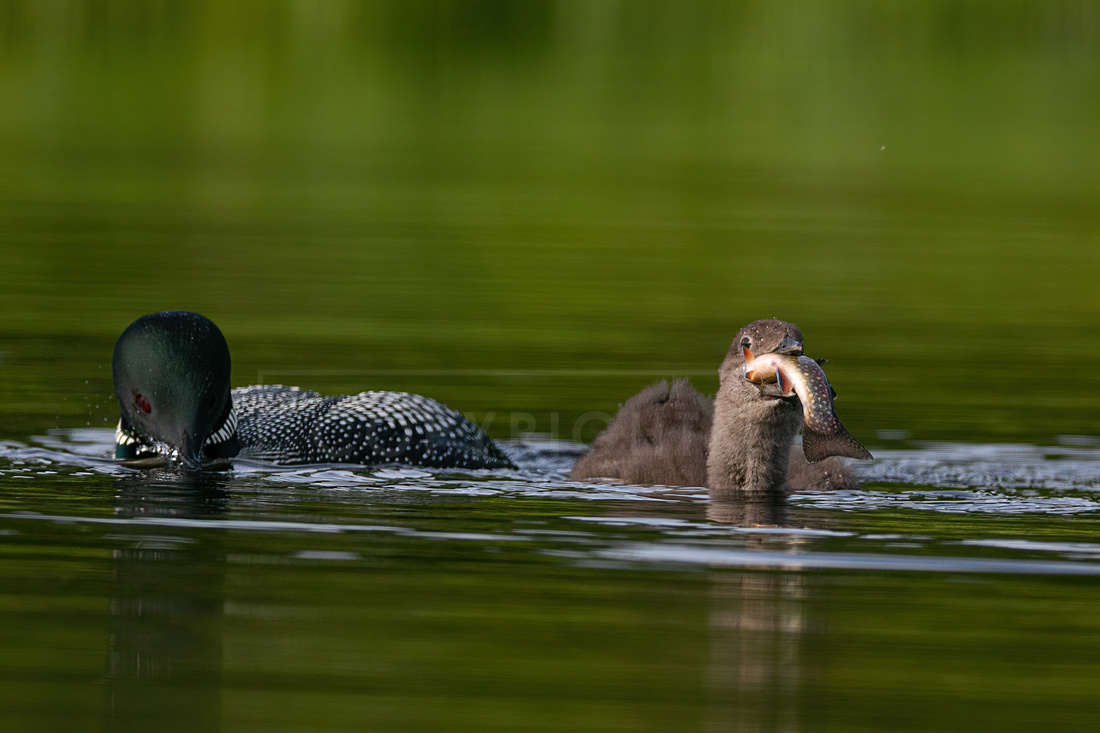 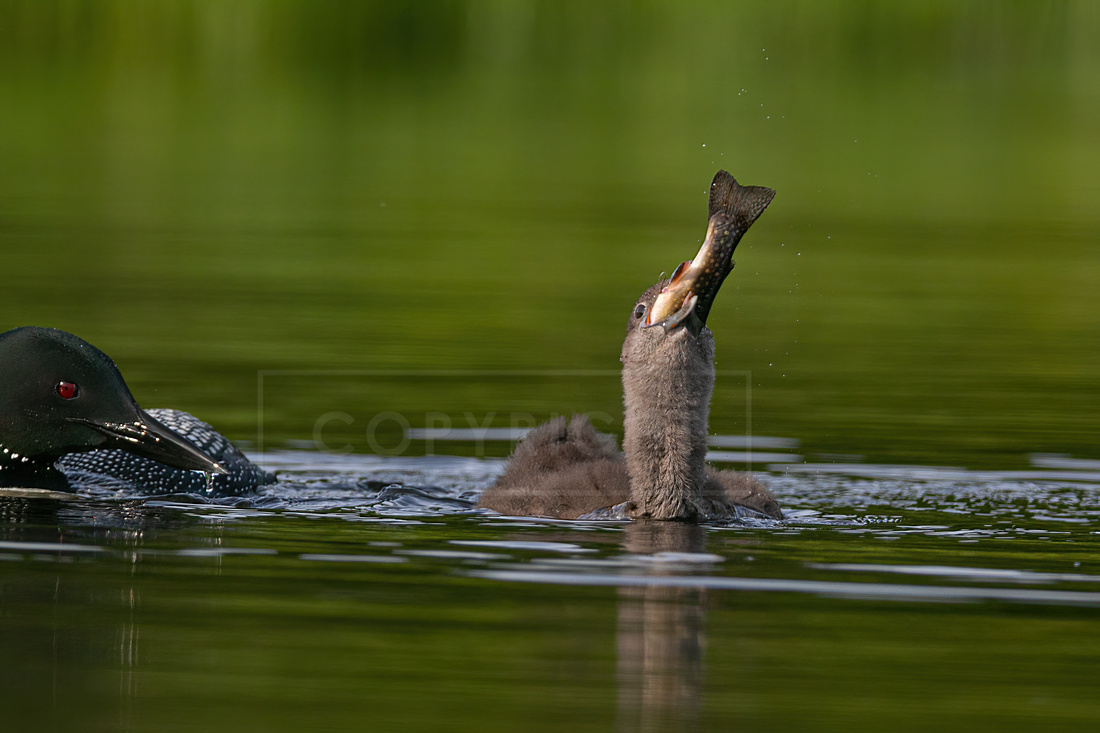 The other chick got a shot at the next fish that was delivered. 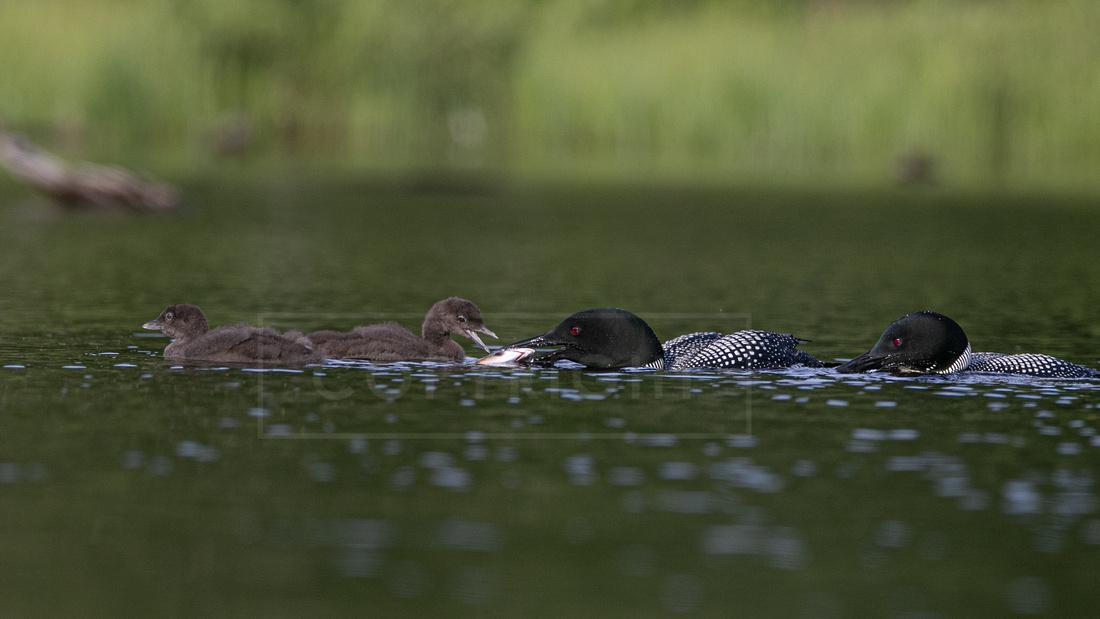 The chick promptly dropped the fish... 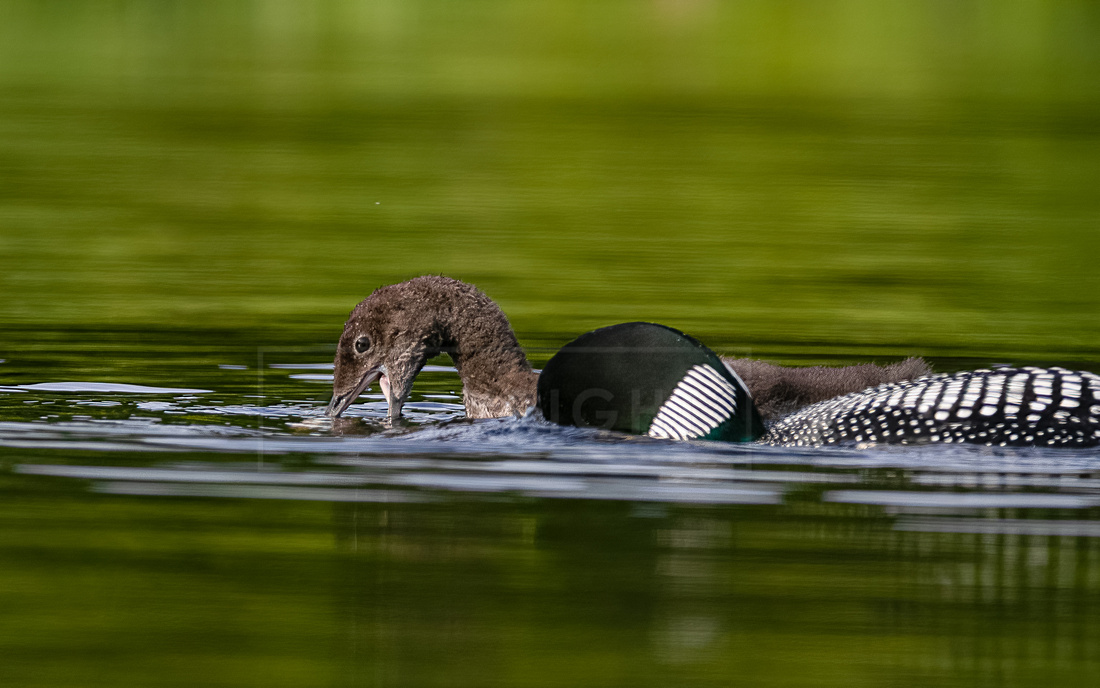 The adult recovered it, and handed (billed?) it back over.

This fish proved to be too big, one of the adults ended up eating it. 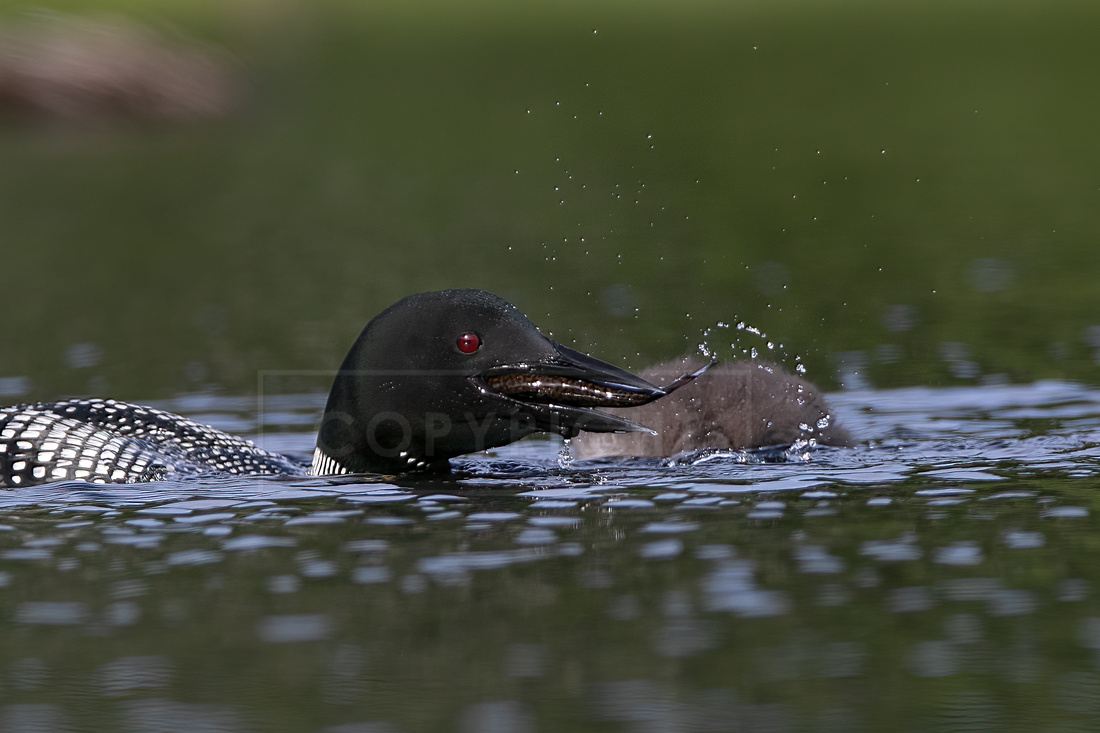 And a last shot of one of the chicks stretching. 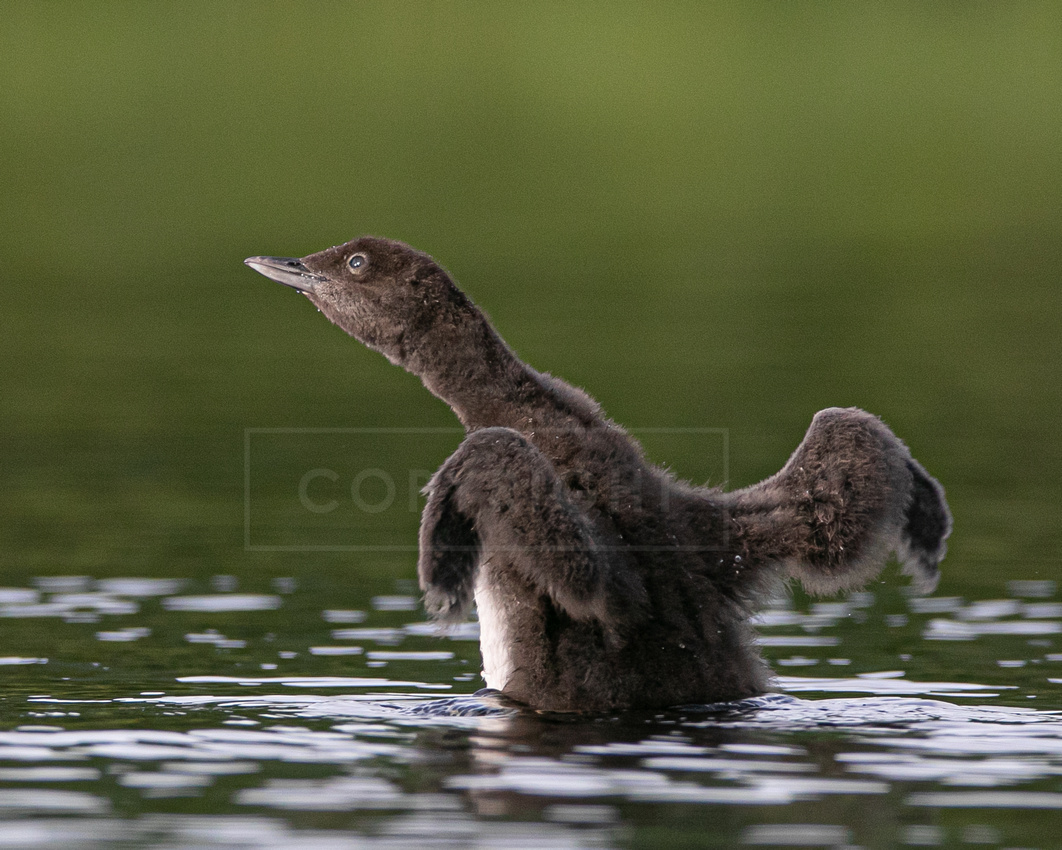 Jill(non-registered)
Very cool! Love the photos and the commentary. Thank you
BarbMaltese(non-registered)
Absloutely wonderful photos! Actually better than seeing them in real life - could not get that close. Thanks!
Kate Mortimer(non-registered)
Wonderful sequence and commentary! Thank you, from one who has not been able to get out to see these sights.
Claire Mead(non-registered)
The photos are stunning, and the commentary is engaging and informative. Bravo!
Jo(non-registered)
So wonderful, thanks for sharing.
And I greatly appreciate that you specified that you kept a significant distance from the loons. The forest Society recommends a minimum of three hundred feet to protect this threatened species.
No comments posted.
Loading...
Subscribe
RSS
Recent Posts
My blog has moved! My Favorite Loon Pics of 2021 Dexter & Romeo 2022 Calendar Loon Chicks at Ten Weeks, September 7, 2021 Saturday Morning With The Loon Family, August 21, 2021 Checking In With The Loons, August 4, 2021 Update on Both Loon Families, July 30, 2021 Finally! The Swallow Chick Fledges, July 21, 2021 Swallow Update July 20, 2021 Swallow Update July 19, 2021
Keywords
bluebirds bluebird bluebird box bluebird cam bluebird nest bluebird nesting building nest eastern bluebird eastern bluebirds video of bluebirds
Archive
January February March April May June July August September October November December
©2019 Ian Clark
User Agreement
Cancel
Continue