Piping plover chicks have hatched on the New Hampshire Coast. I visited last week. In the short section of beach I visited, I found two families with chicks, one with three and one with four chicks. There were also a number of common terns terrorizing the beach denizens, winged, armed or legged.

What's your vote for cutest bird? Piping plover chicks have to be on anyone's list.

Let's start with the terns. They nest in the sand dunes not far above high tide. They make a shallow scrape for their eggs. And, they defend their territory with gusto! They'll swoop, peck and sometimes poop on intruders. Once one tern gets upset about an intruder, it seems like all the terns on the beach join in the commotion and find some critter to drive off.

Here's one sitting on a nest. 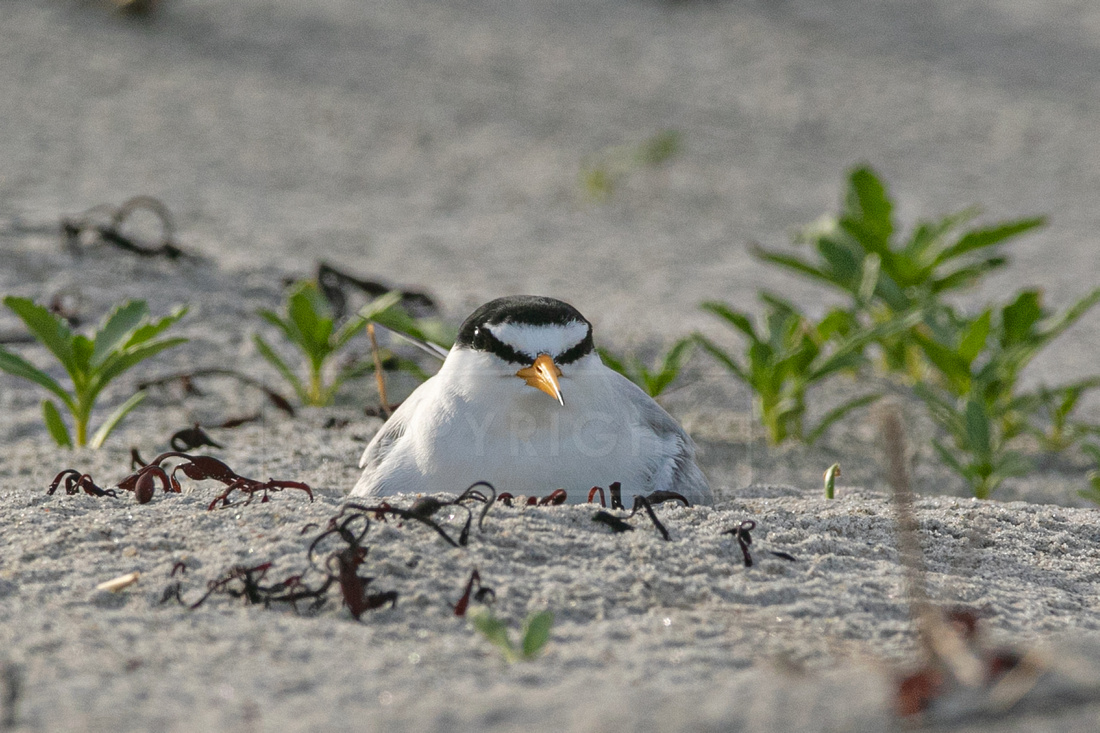 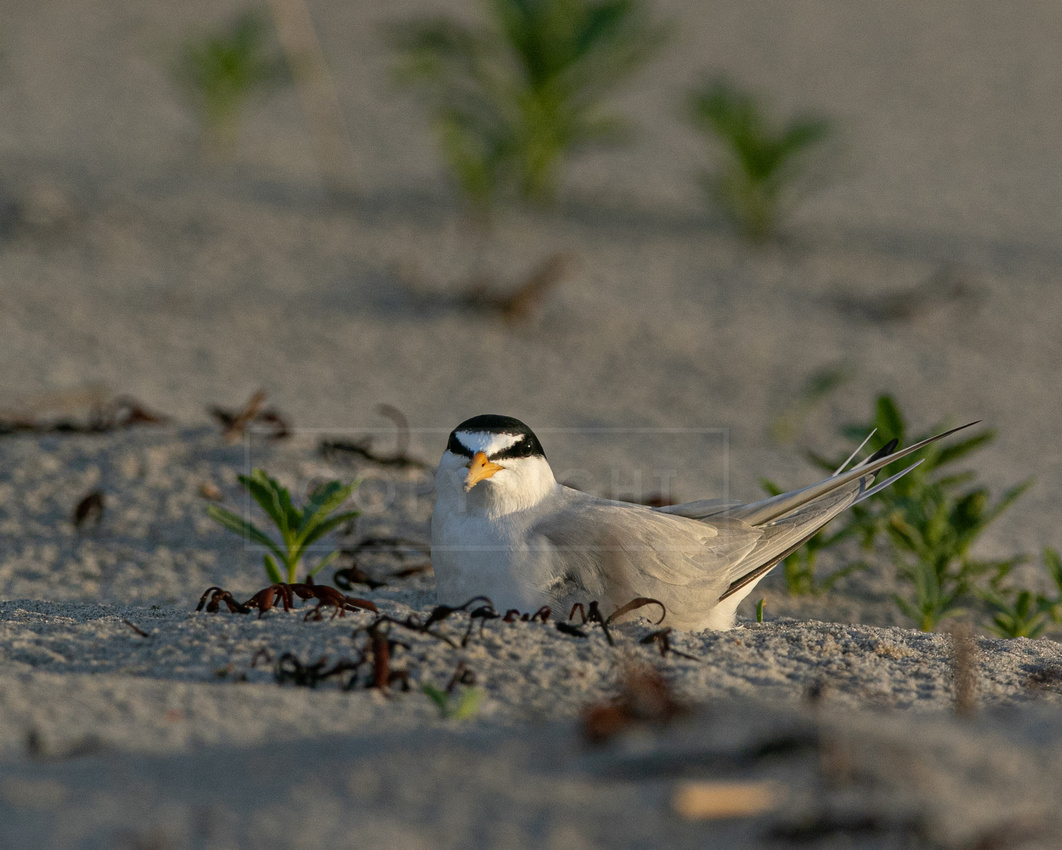 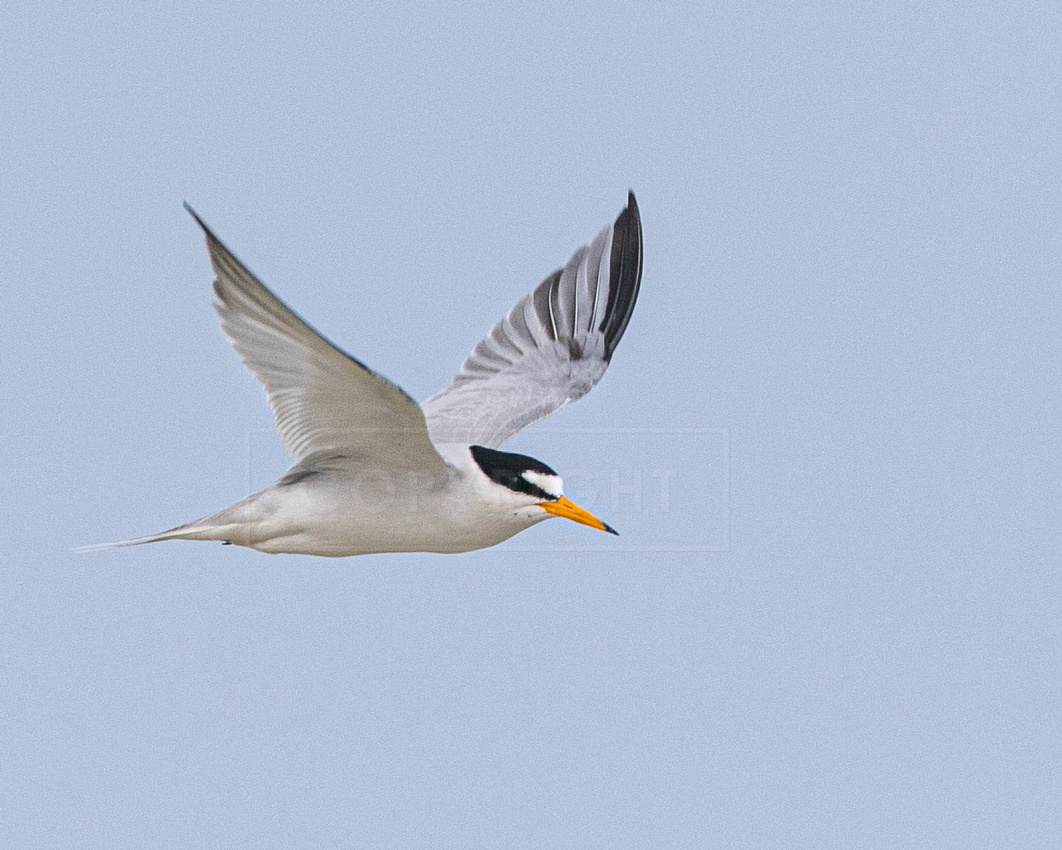 Escorting a gull from the premises. 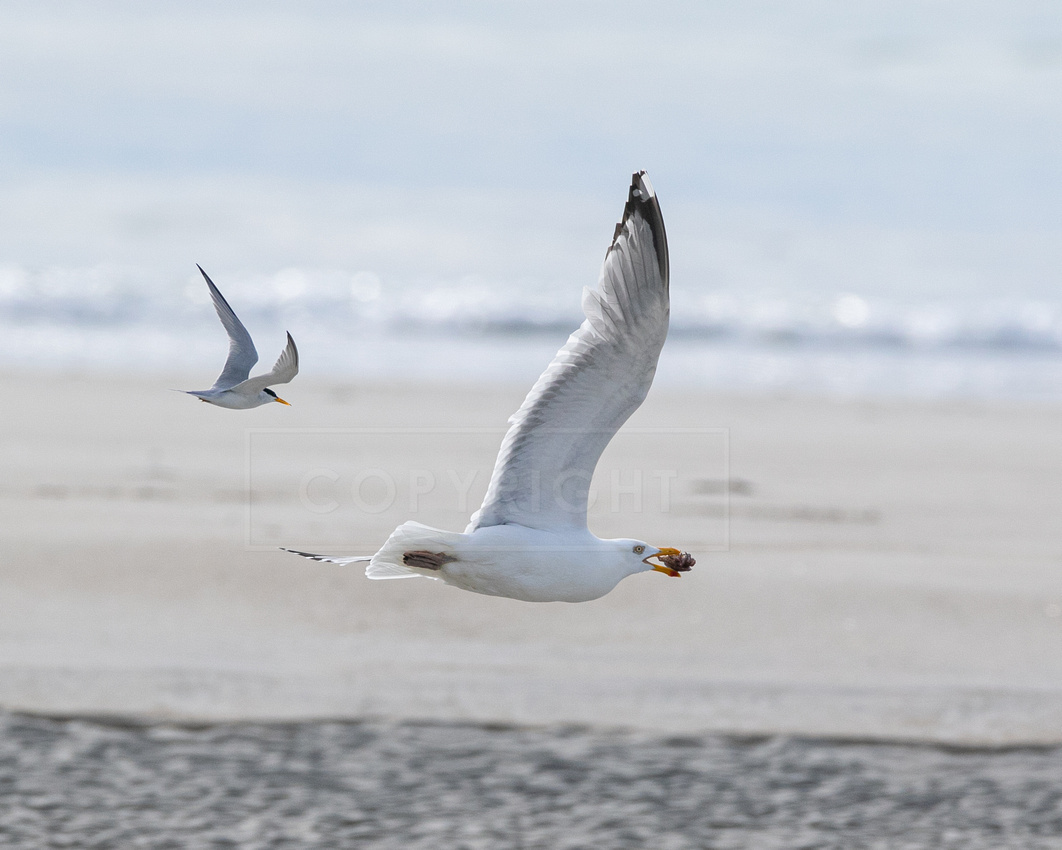 Adult piping plovers are handsome birds. They're not very large, about 7" long. They hunt for small crustaceans, worms and insects along the beach. You probably won't see them until they move. They run - very fast - for short spurts. They live along the northeastern coast and in the Great Lakes. They're endangered. I've seen the figure 6,100 individuals, but never with a citation.

Here's mom - or maybe dad, only they know - overseeing the chicks running about on the beach. 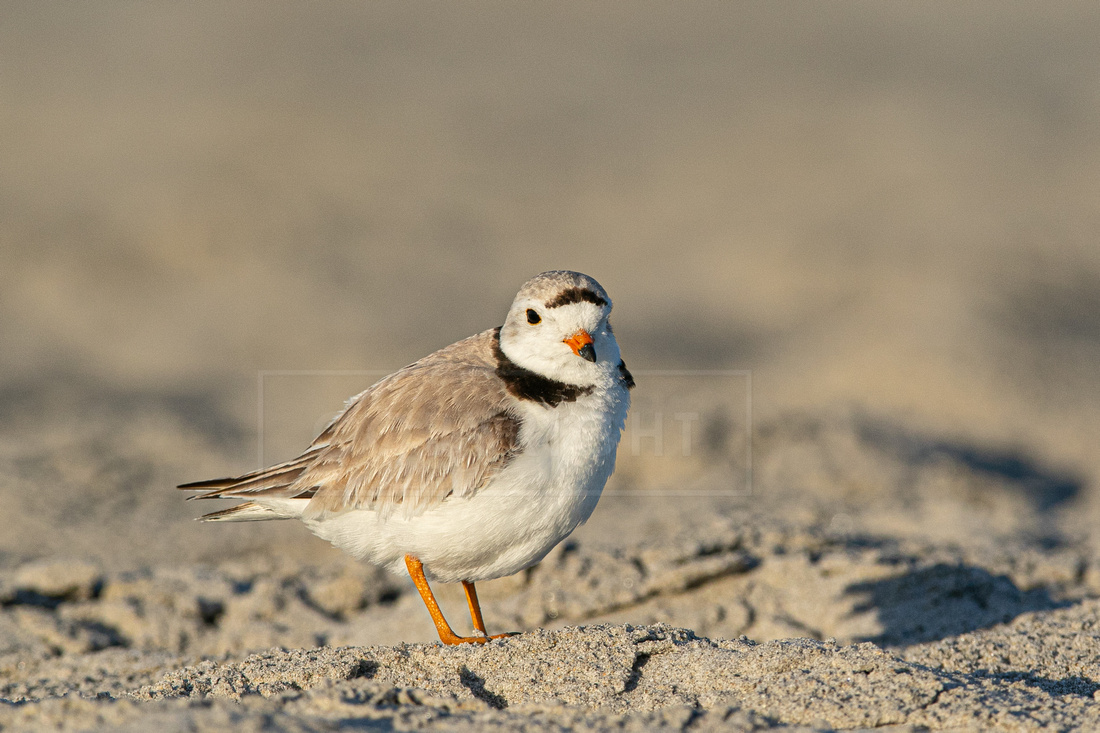 They seem to coexist with some plovers, and drive others away from there territory. Perhaps they come to terms with their neighbors, but still view others as threats. This plover has spotted another plover it wishes would go away. 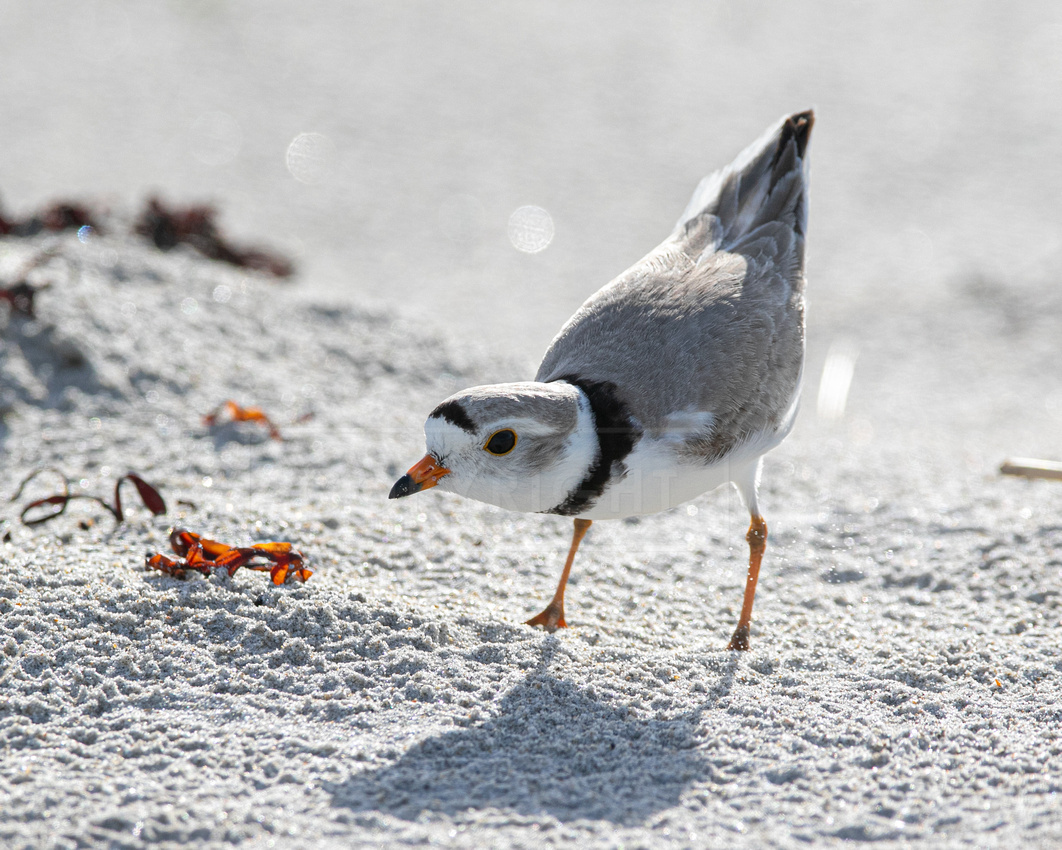 Chicks are born ready to forage, the parents take turns supervising them as they run about the beach. The parents seem fairly laissez-faire about watching the chicks. They chicks are often well out of the parent's sight. The parents call occasionally, probably to keep the kids relatively close. Every so often, the parent baby sitting decides the chicks are cold and calls them in and they duck under the adult and everyone sits for a few minutes. 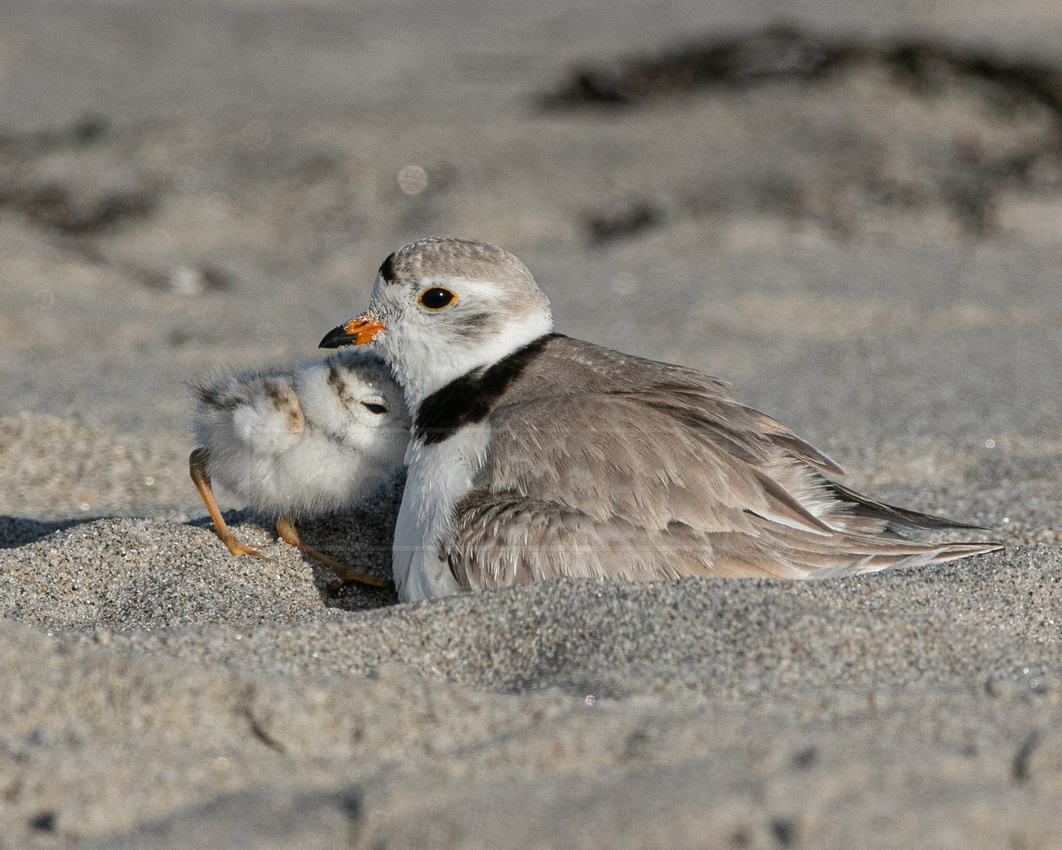 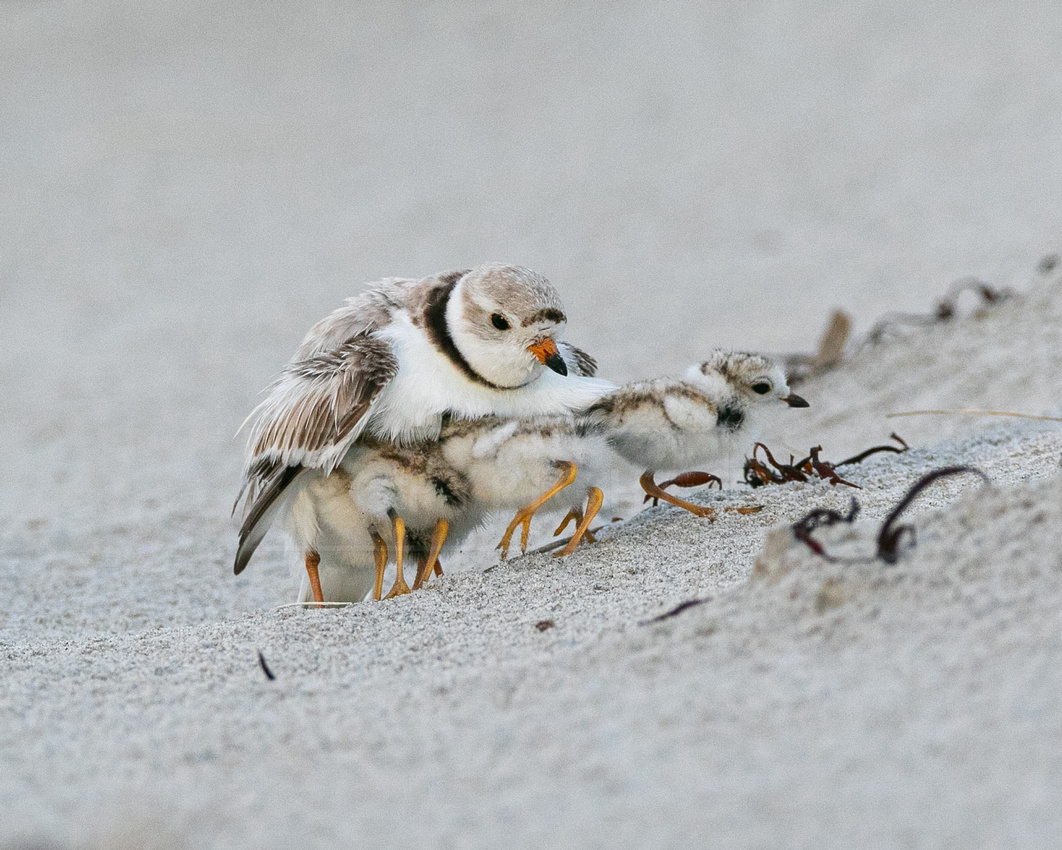 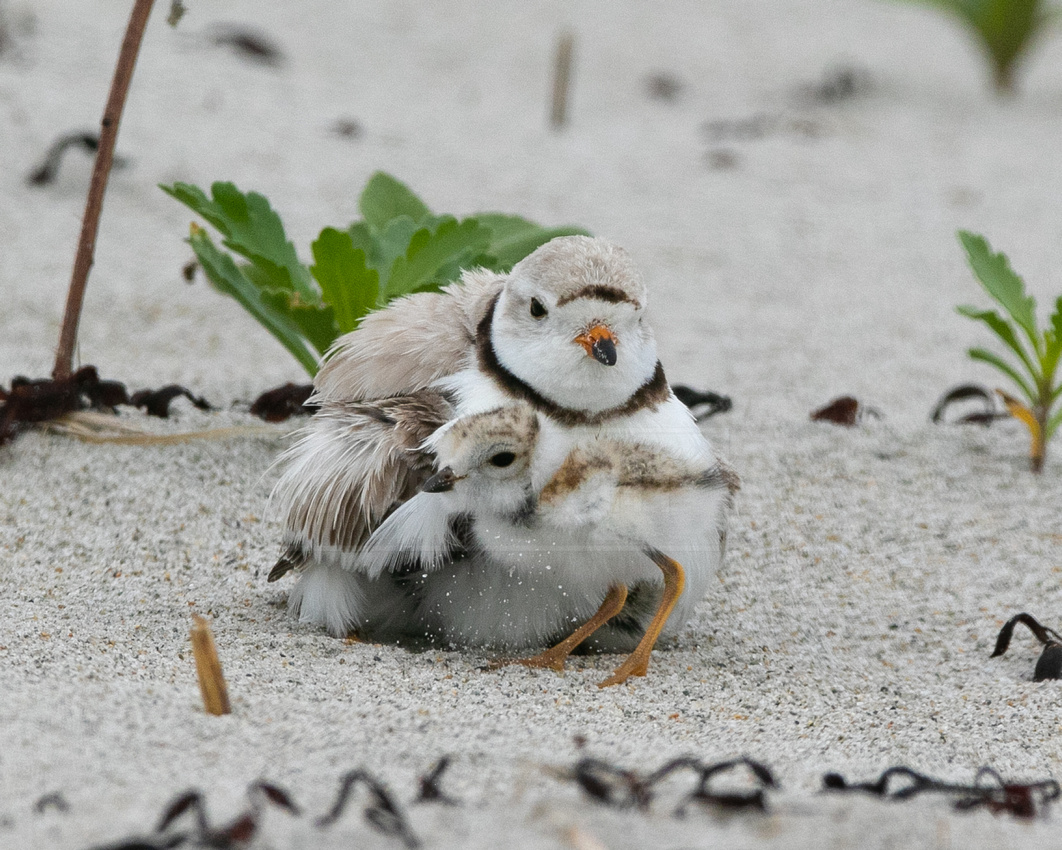 This parent reacted to its mate returning to sit the kids by scrunching down and fluffing.

And the chicks are just darned cute. They run about the beach exploring, foraging, stretching and fluffing. They run in short spurts, changing direction on a whim. 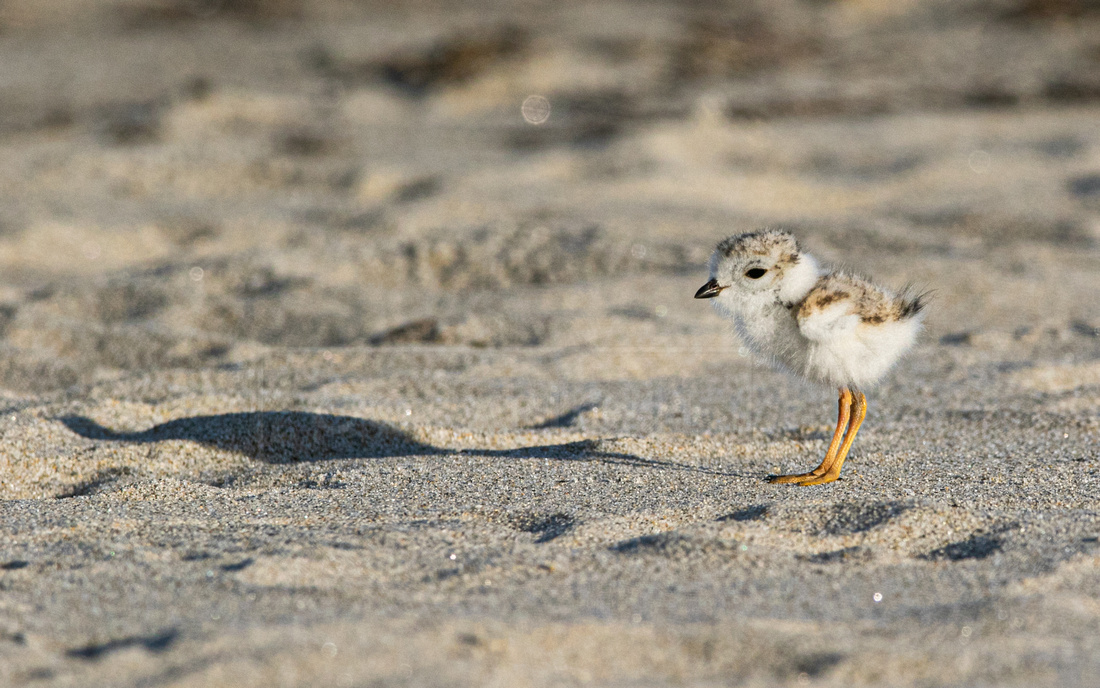 It takes them a while to grow into their feet. 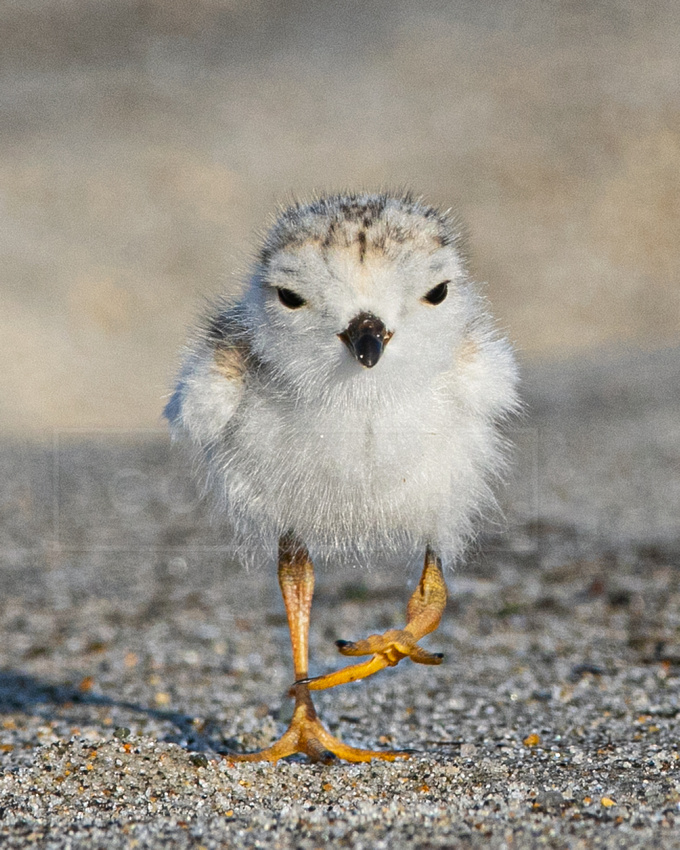 Watching them walk, I can't help but wonder if they were the inspiration for the two-legged walkers in Star Wars. 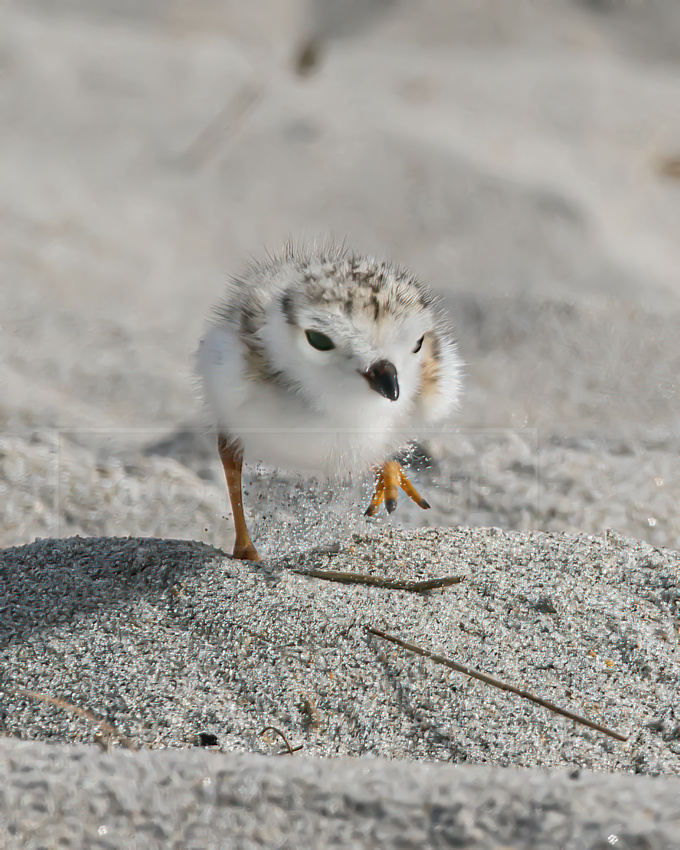 Exploring along above the high-tide mark. 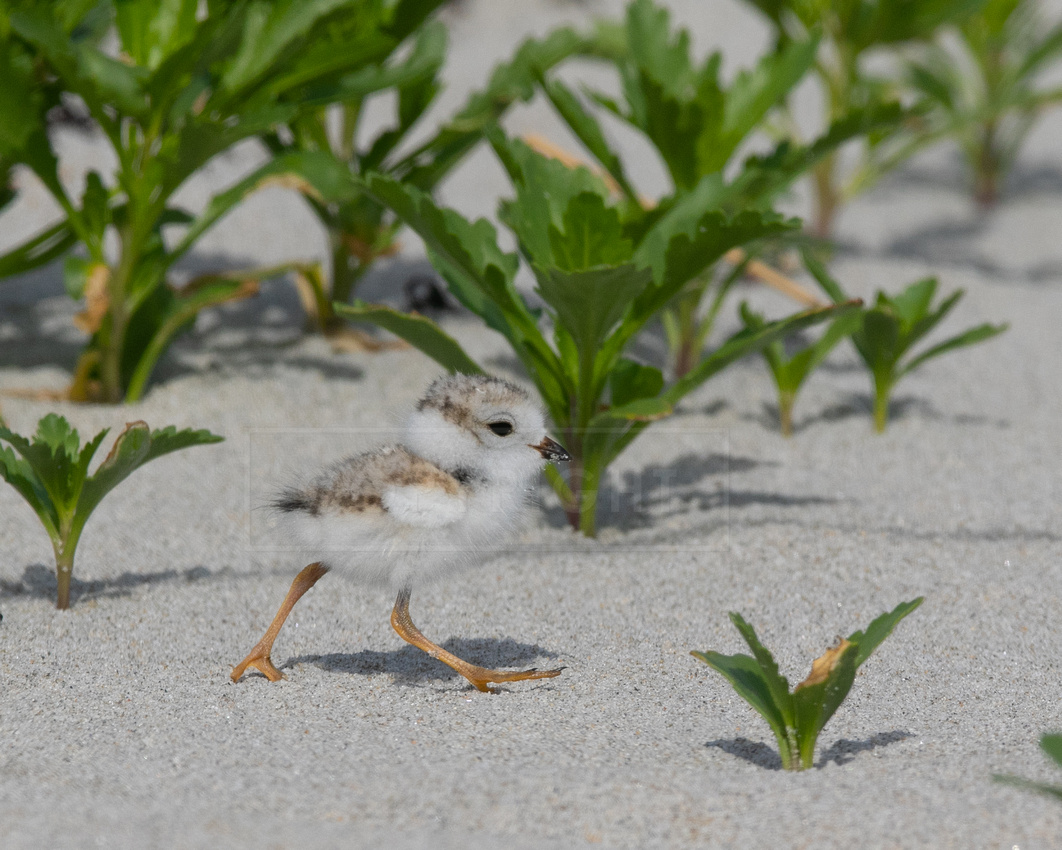 With a tiny snack. 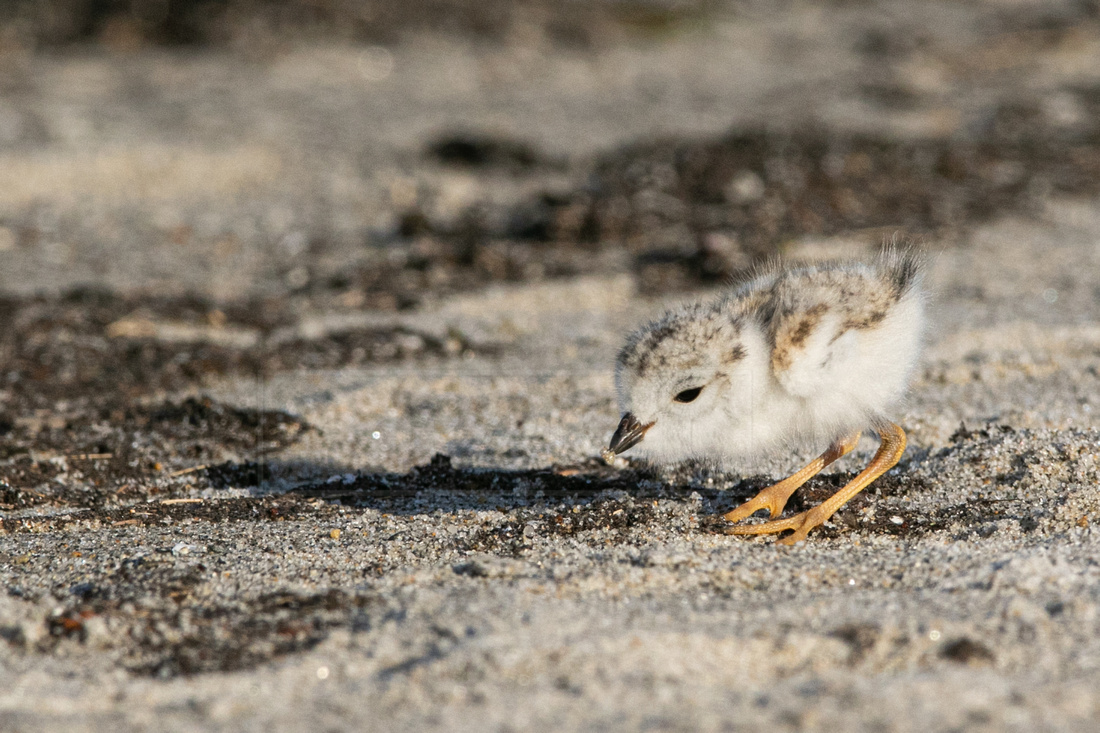 And a more substantial worm. 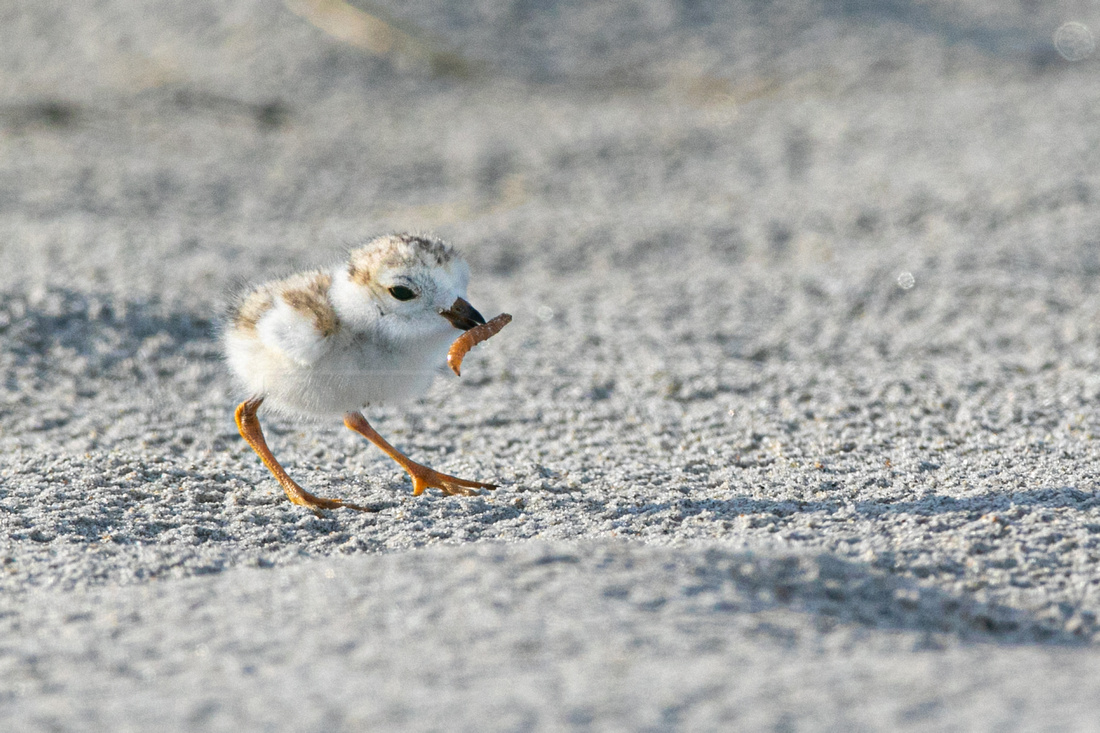 And, just learning how to be a bird. 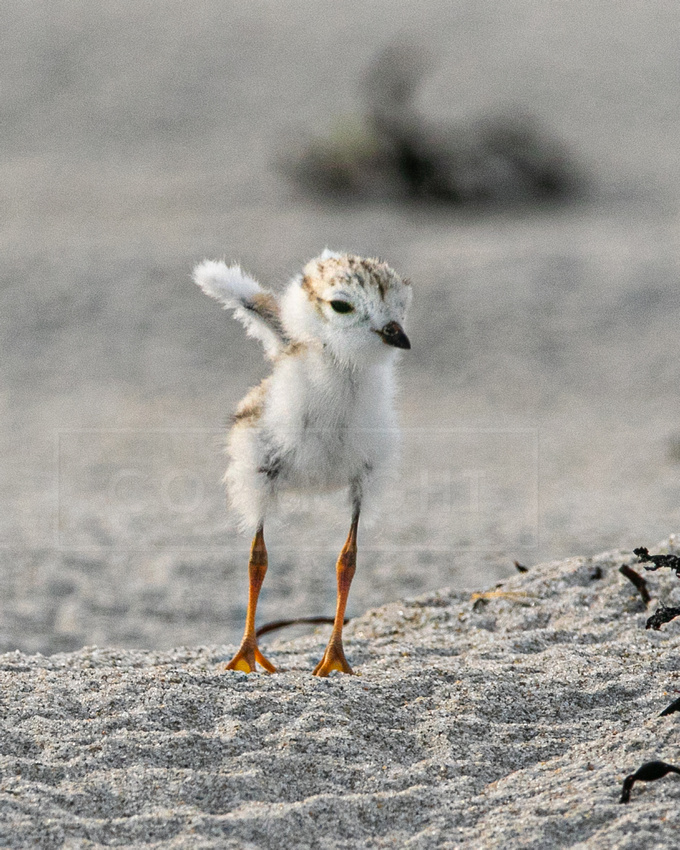 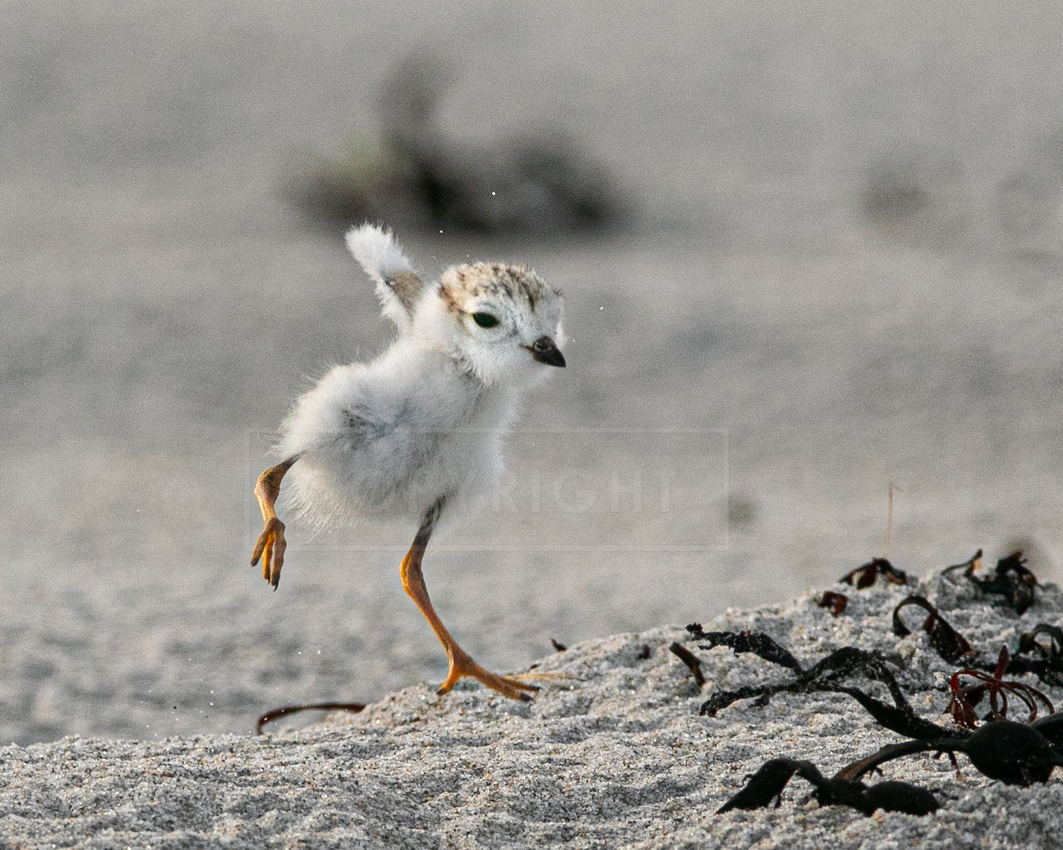 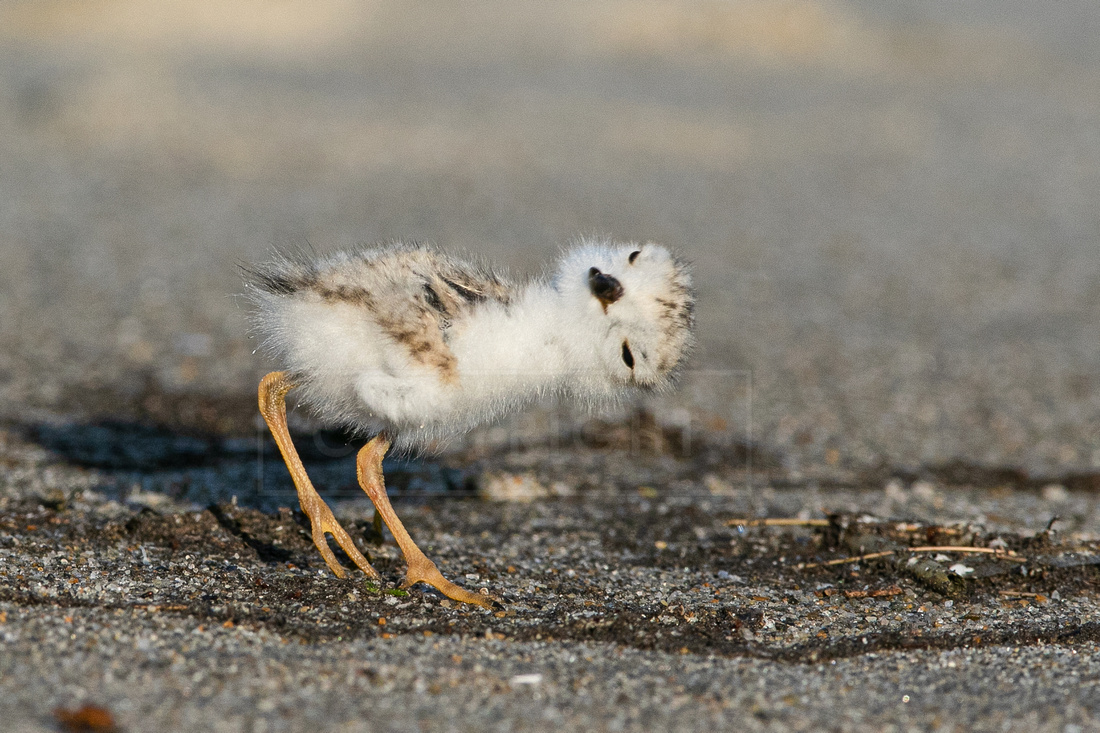