Friday Morning with the Loons

Our little loon family spent a mostly quiet morning on their Upper Valley pond this morning. Everyone slept in a bit before mom and dad went to work to deliver breakfast. The chicks are growing quickly and doing well in their studies to be loons.

With an iffy weather forecast and a couple appointment scheduled for this morning, I debated if I should head out. My wife was up early to head to King Arthur to make bread and I got up and peeked out. Seeing lots of stars, I started packing up. My trusty mouse sidekick turns out not to be so trusty and was nowhere to be found. His cousin, Thelonious chipmunk, did greet me in the garage. Apparently my service at the feeder is not up to snuff and Theo let himself in and was busy redistributing sunflower seeds from the bag to the corners of the garage. After we had a discussion about this, Theo was not in a mood to accompany me.

I put the kayak in just as the sun cleared the trees on the pond. I needed have hurried, our family was sleeping in.

After a bit, they began to stretch and stir. 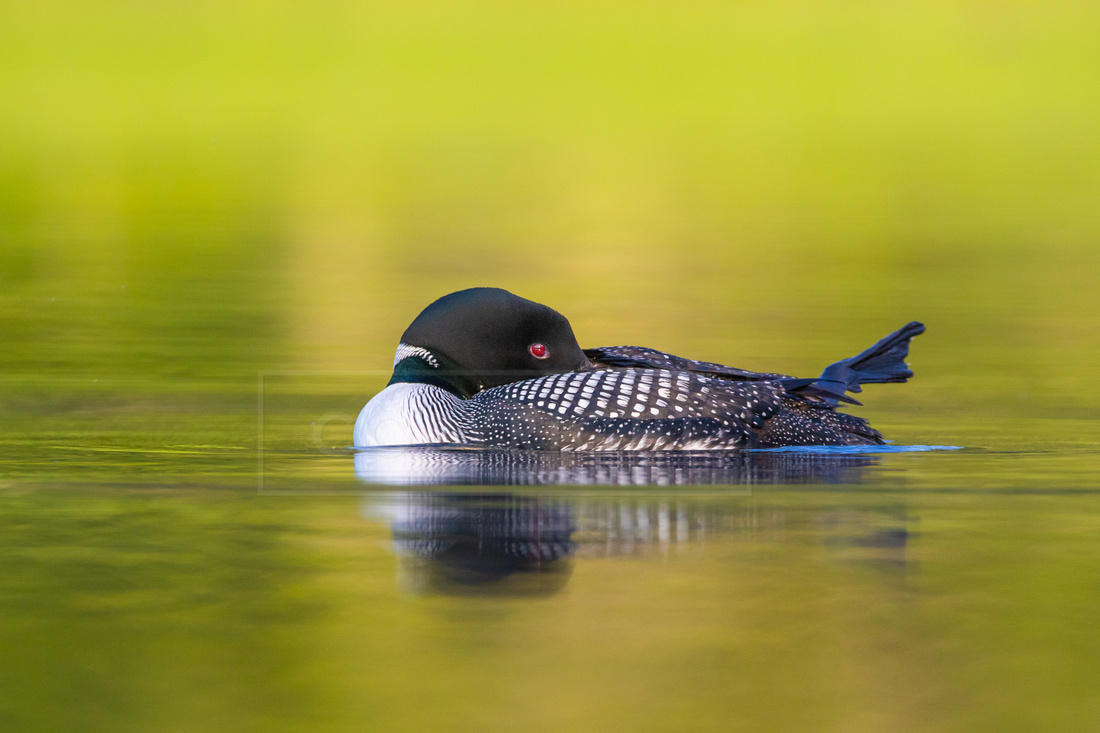 The chicks seemed interested in breakfast, so mom and dad went to work. There is a shallow section of the pond with a variety of water plants. This provides shelter for lots of fry, crayfish, bugs and frogs. Mom and dad headed in through the plants - something I've never seen before - to see what they could find. 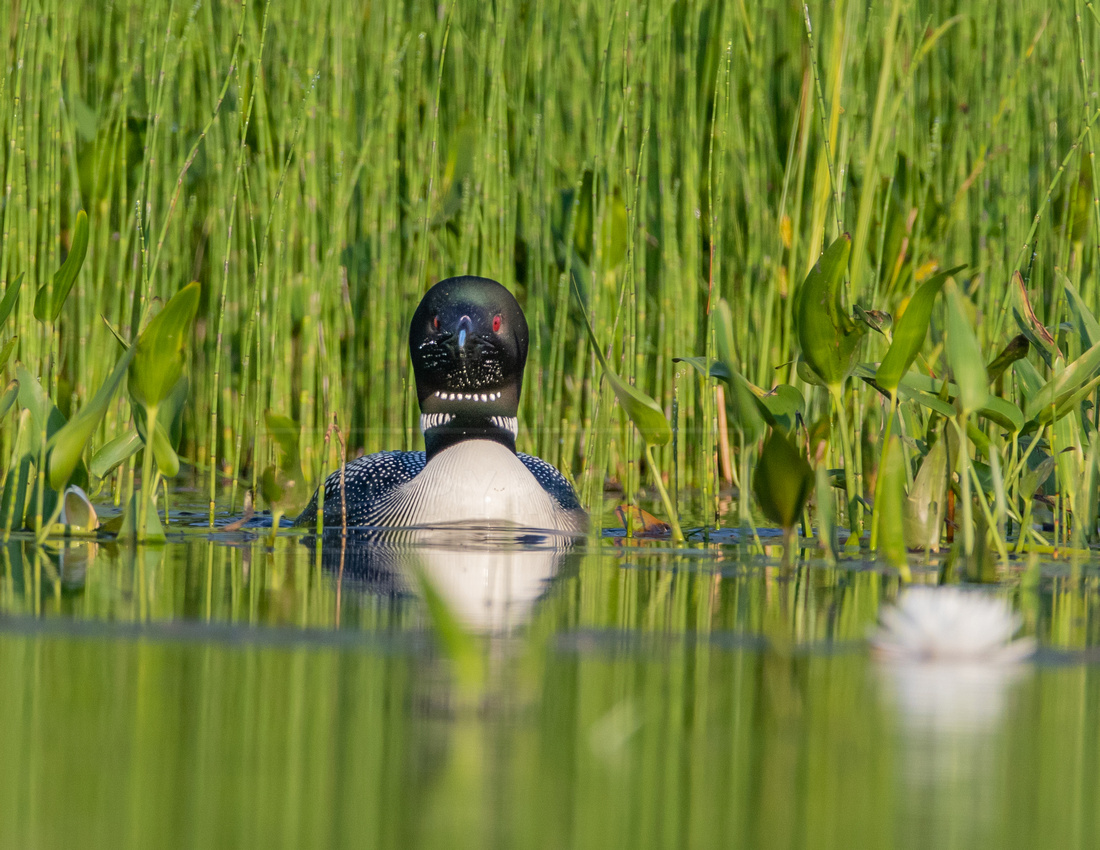 Both parents were very successful catching and delivering a number of fish. Here's one diving to forage 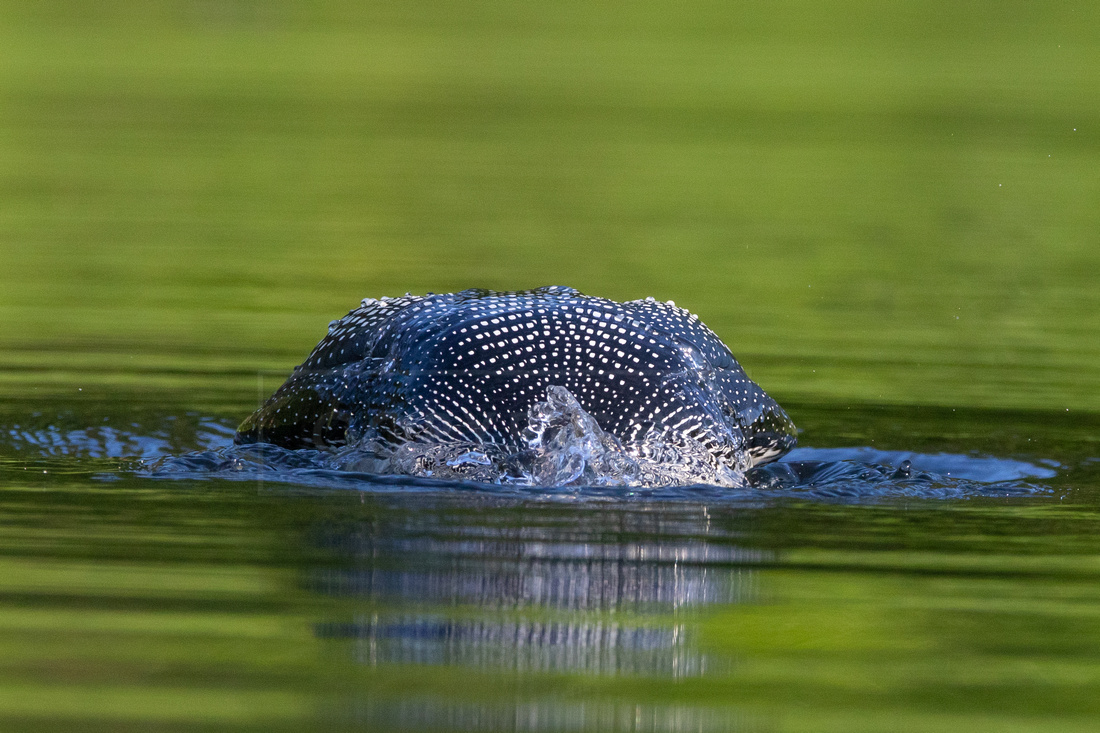 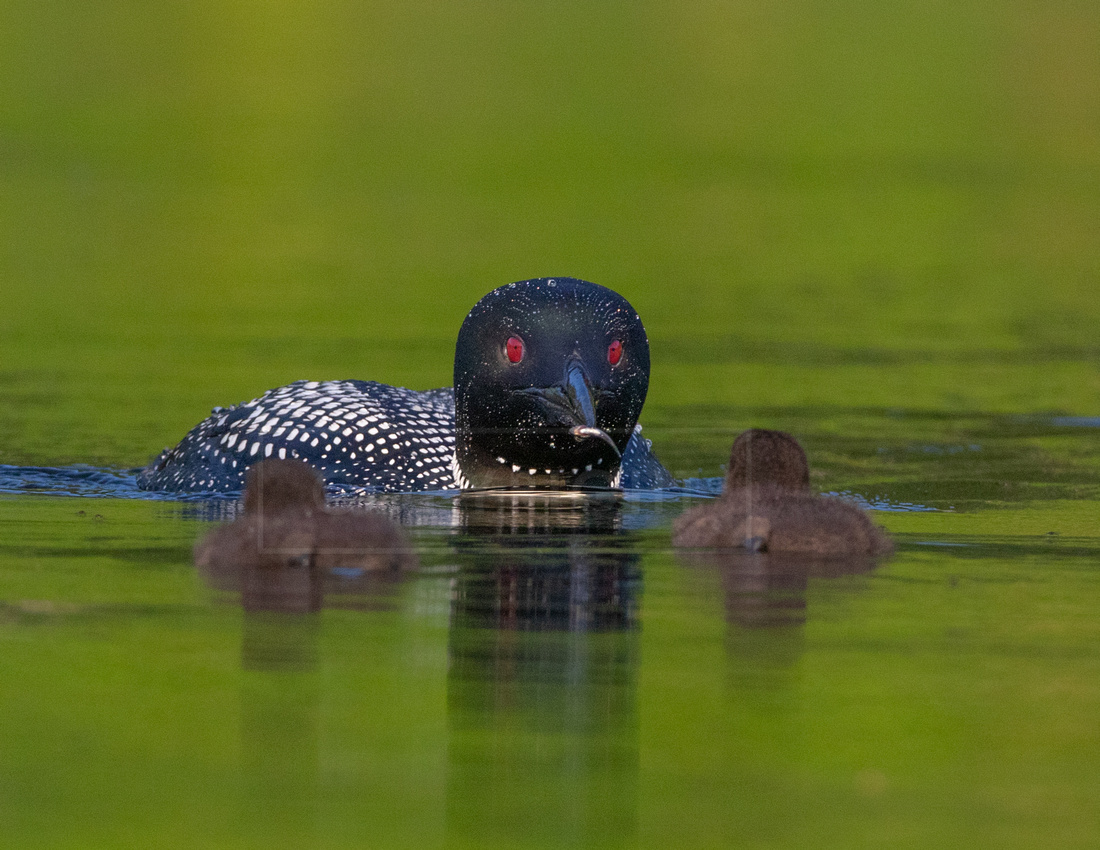 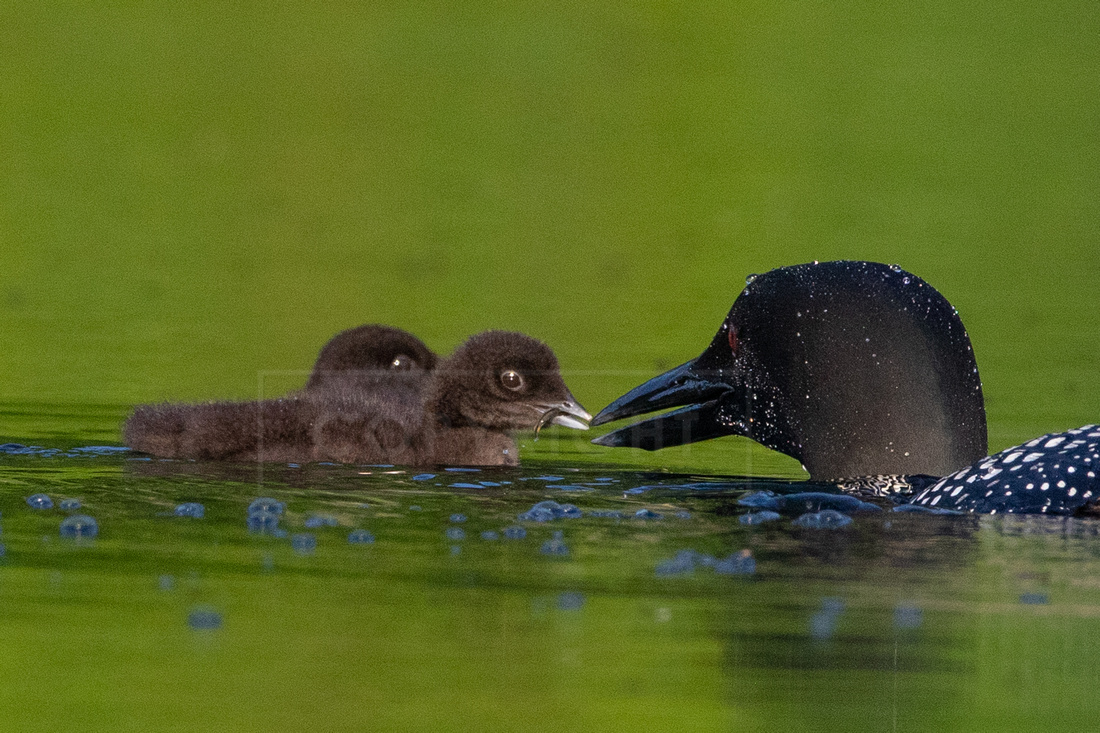 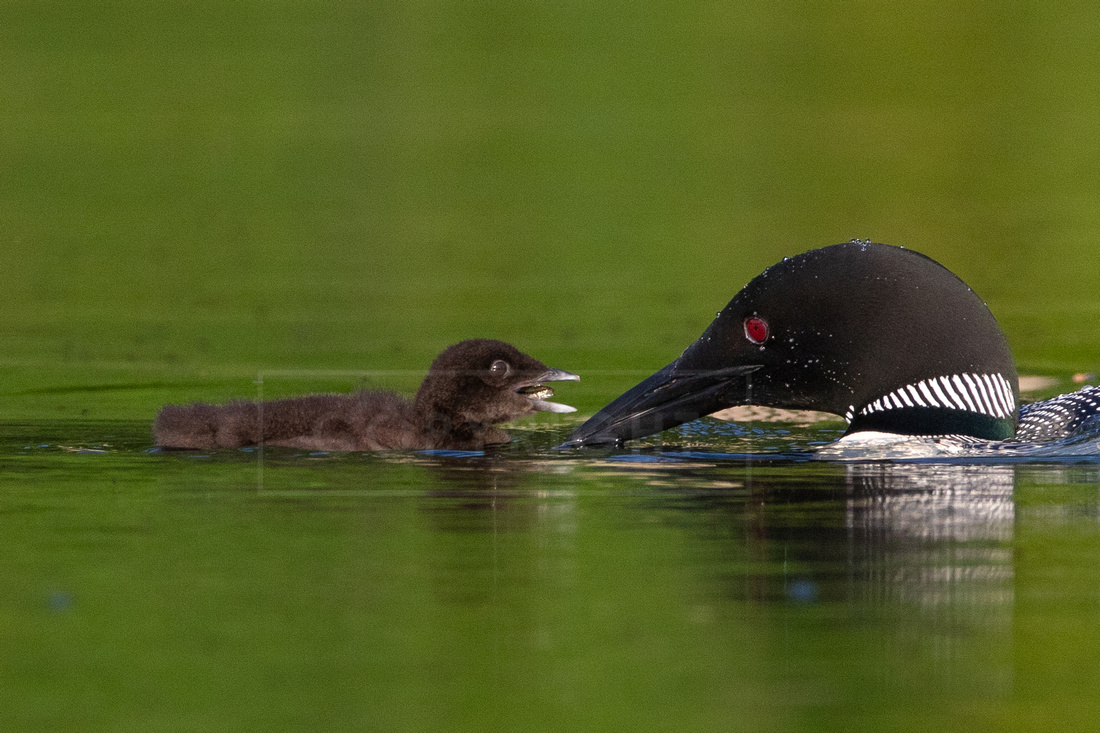 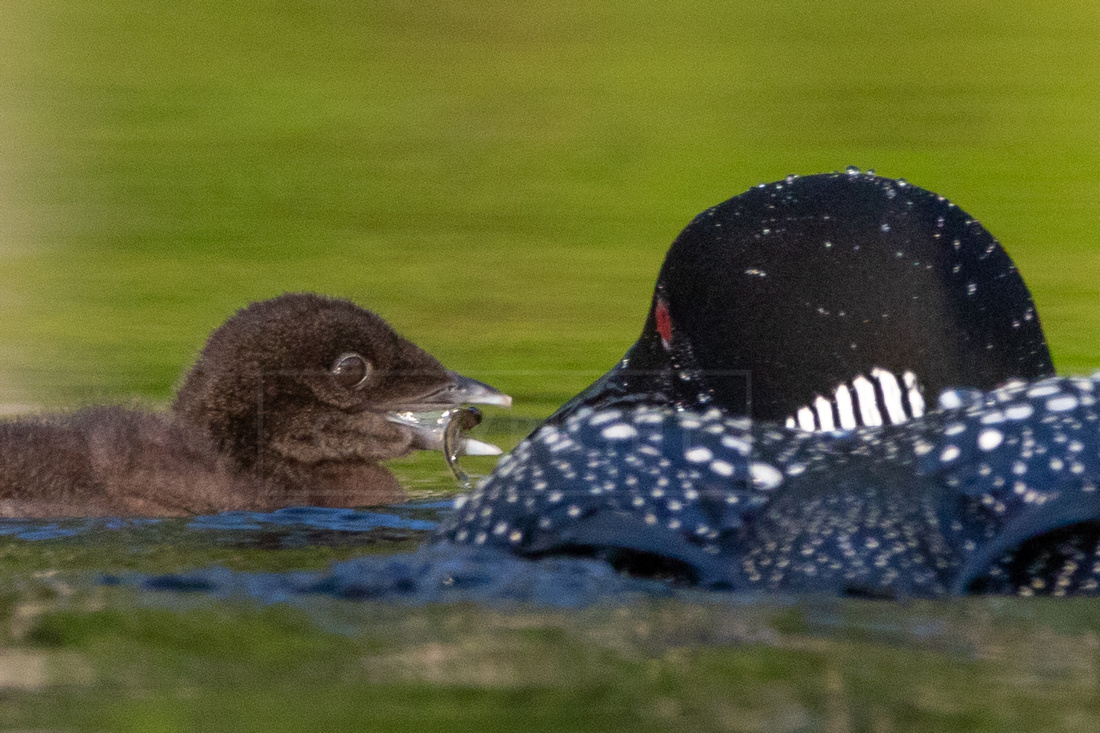 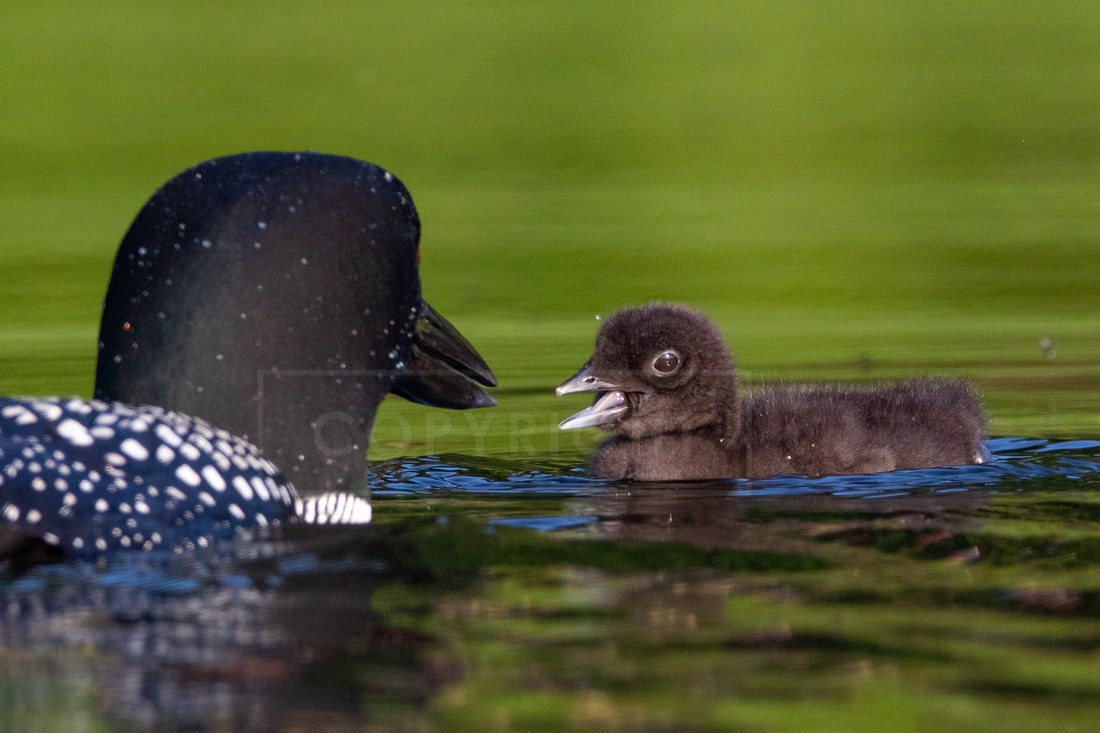 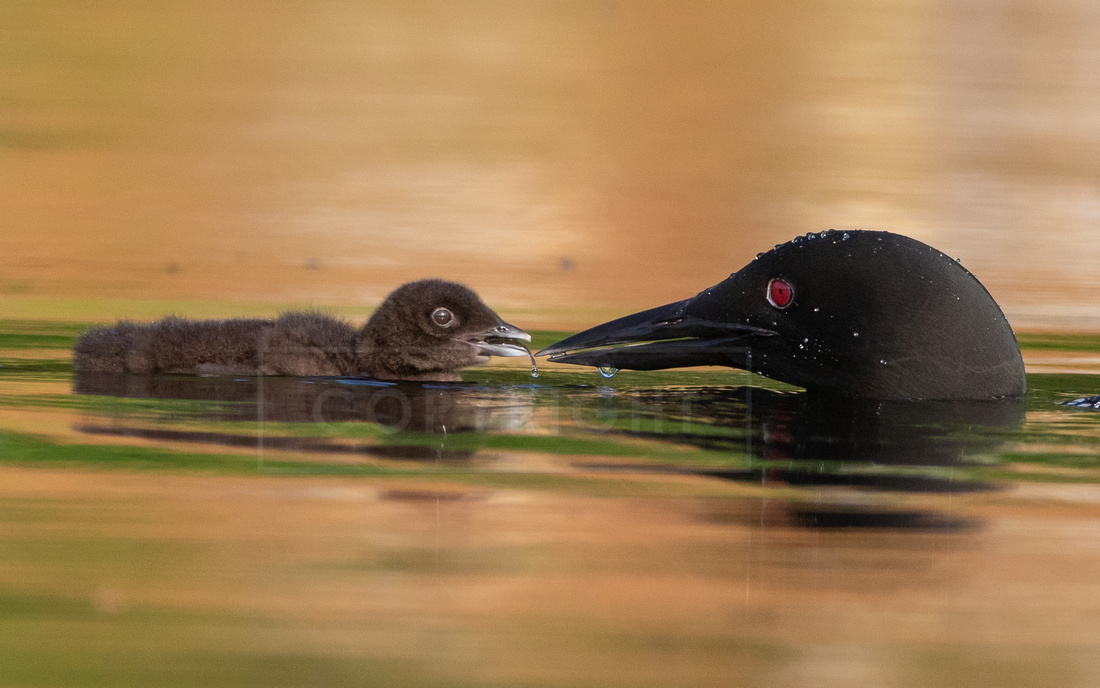 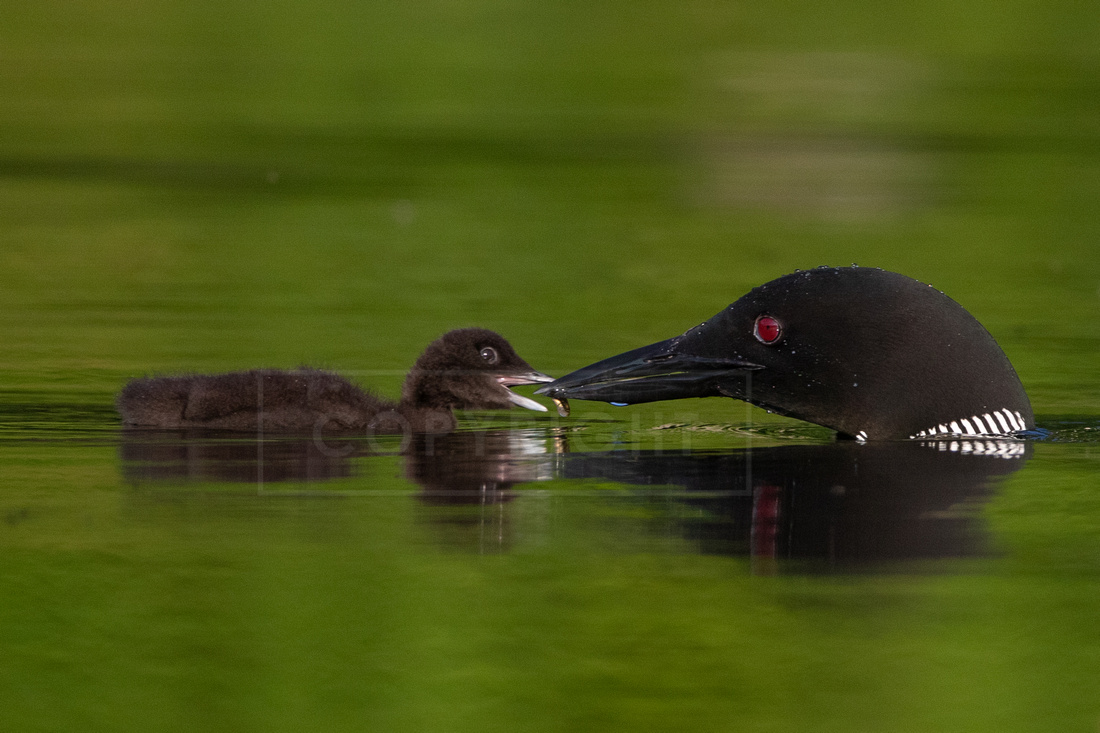 You never know where a loon might surface. I was watching this chick when a delivery arrived. 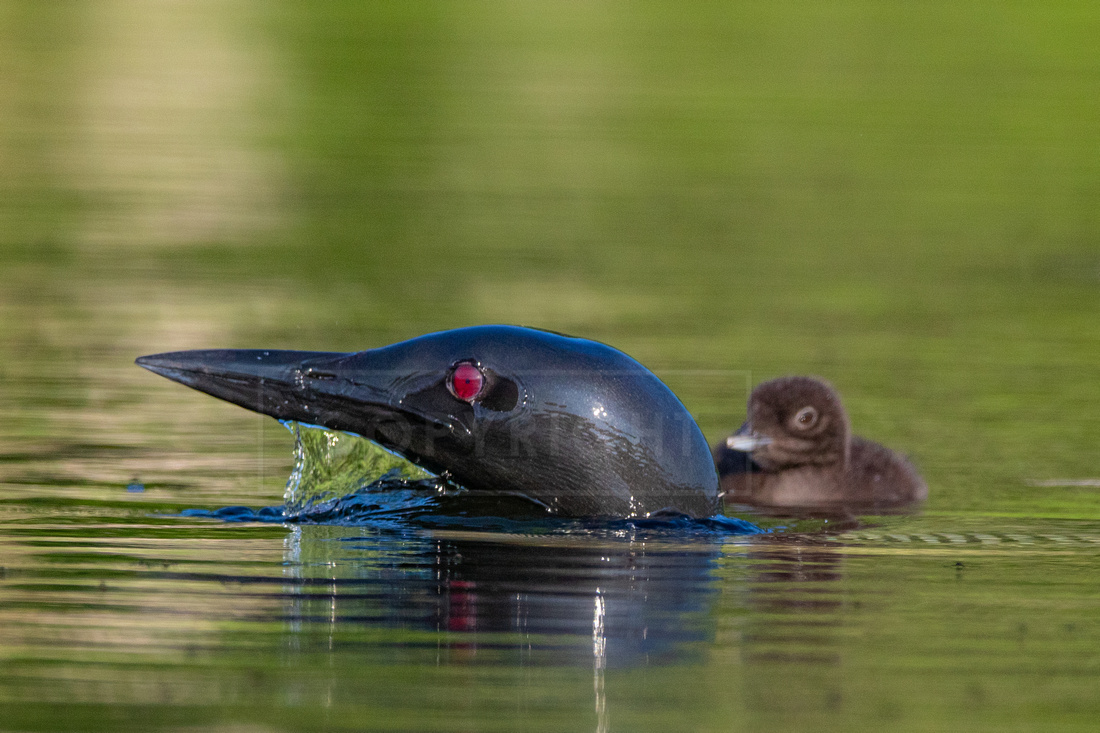 Breakfast was briefly interrupted when another pair of loons flew over the pond. They stayed high above the pond and all the adults called as they passed overhead. There were also a trio of crows (ravens maybe?) that spotted a pair of kingbirds feeding their fledged chicks. The crows went after one, which brought four or five pairs of kingbirds to the fray. The crows talked a lot, but it looked like they went away hungry. Both our loon parents stopped to watch the action.

Back to our chicks. They act like siblings, playing nicely sometimes: 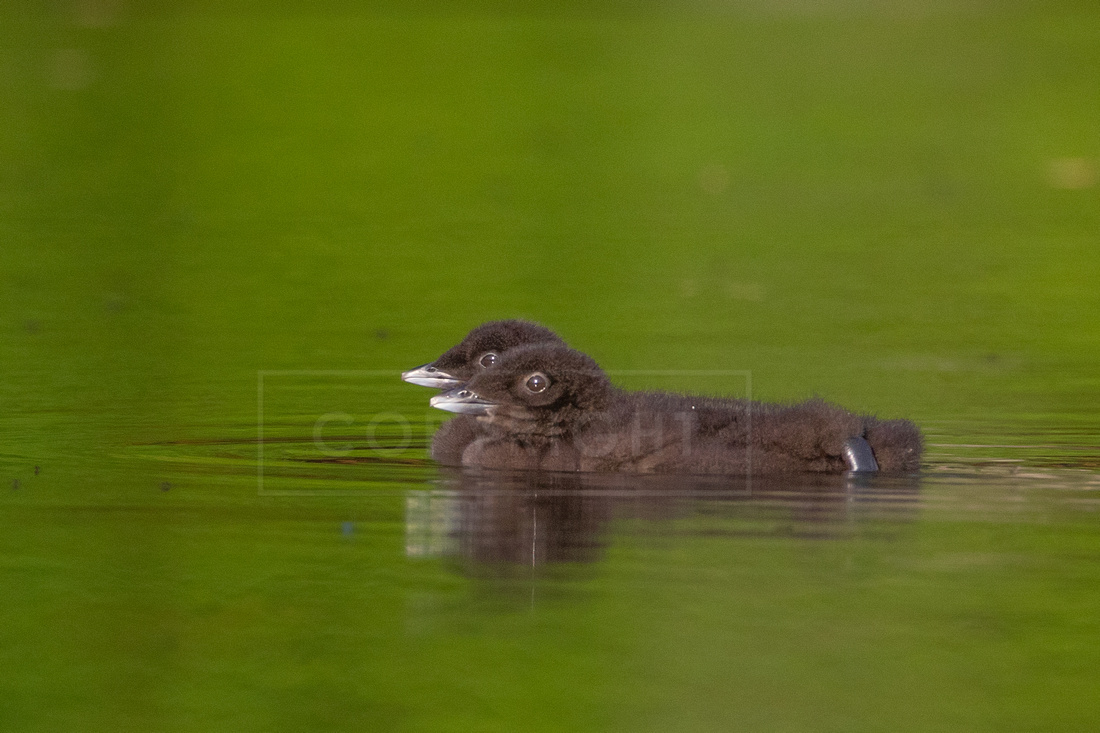 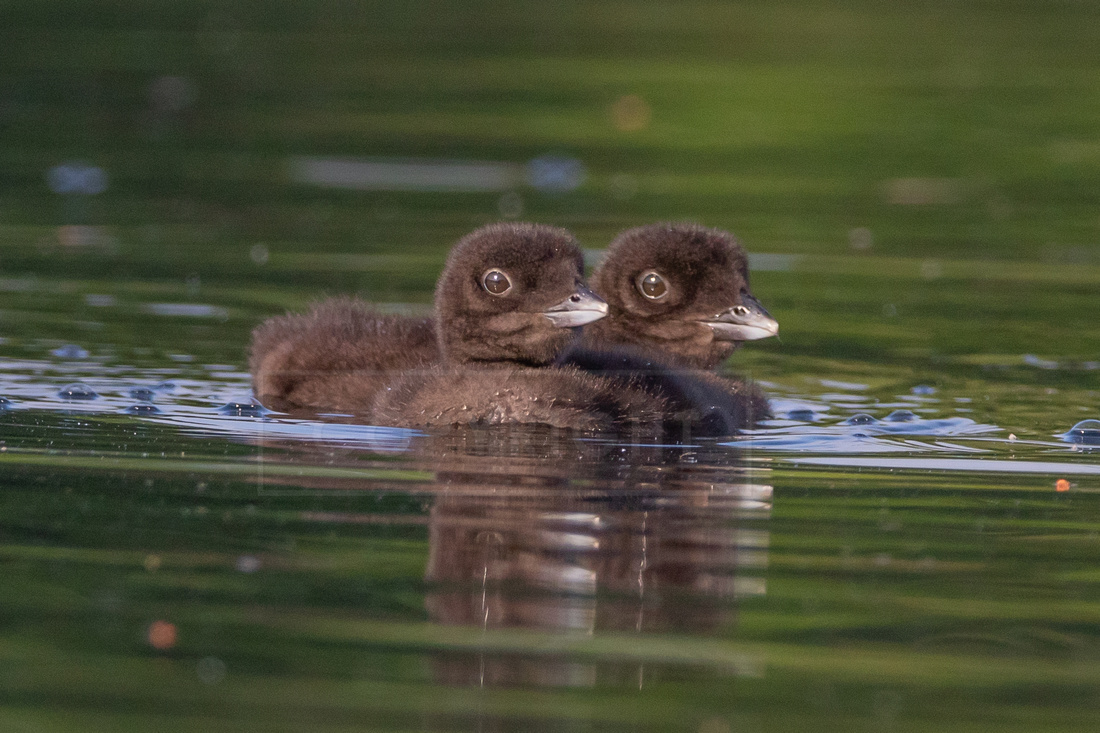 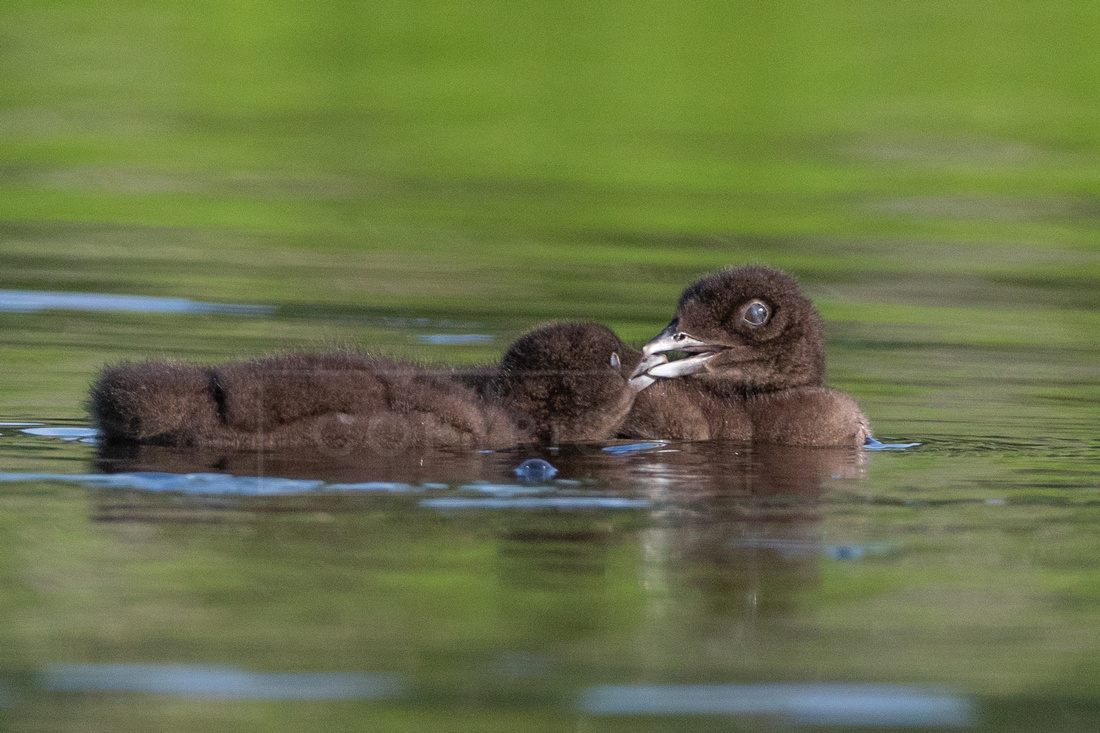 Here a chick gives a good stretch. I've heard it suggested that loons waive their feet in the air to cool themselves. Not sure what to make of that, water should be a better coolant. My guess is that this is just a way to stretch. Look at the size of that foot, that's a lot of surface area to push water to move such a small bird. This shot also gives a good view of how far back a loon's legs are - that's the reason they can't walk very well. 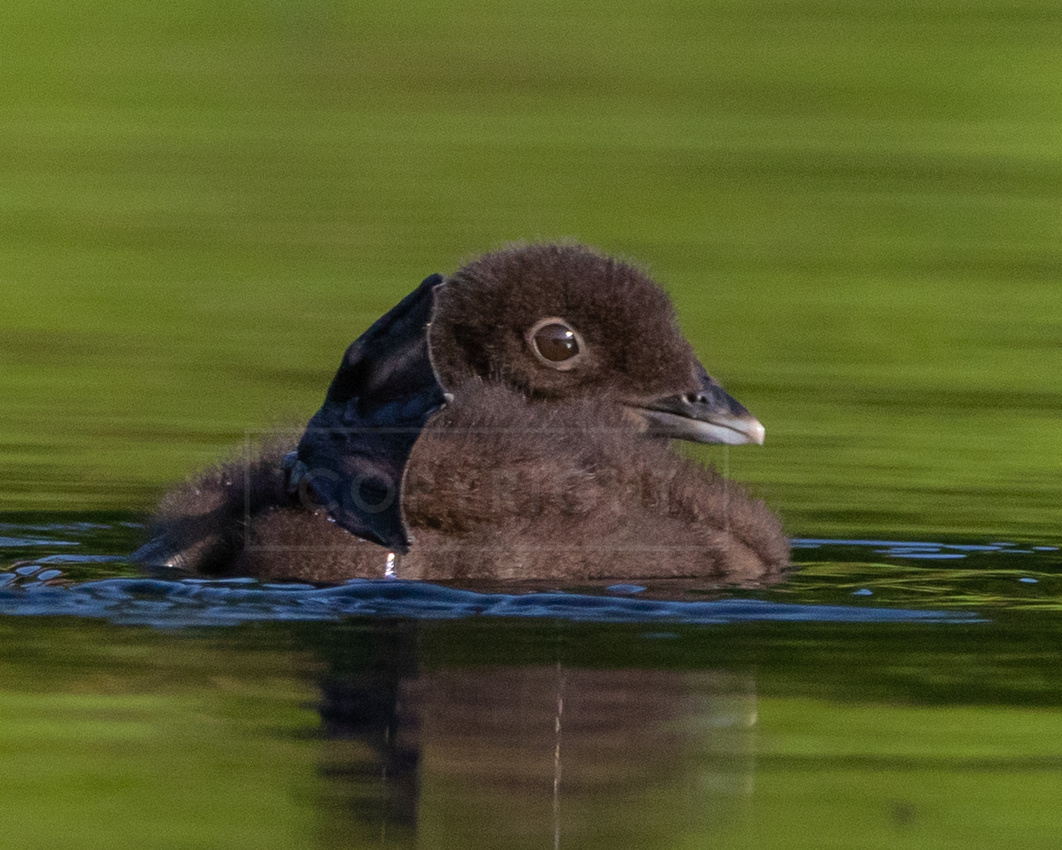 Might as well stretch a wing while we're at it. 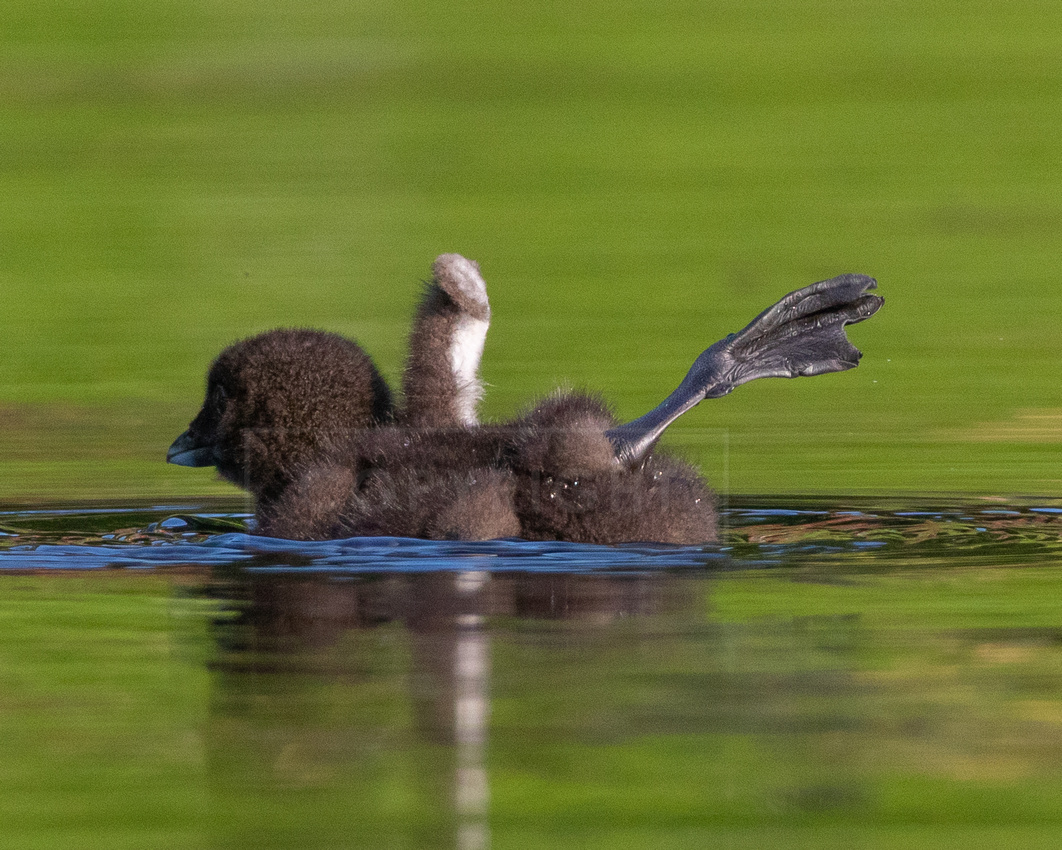 Loons have a small gland, called the uropygial gland, near the base of their tail. This secretes an oil that helps waterproof their feathers. They preen regularly to coat their feathers with this oil. Here, one of the parents is rubbing its head against the gland and then over its body. 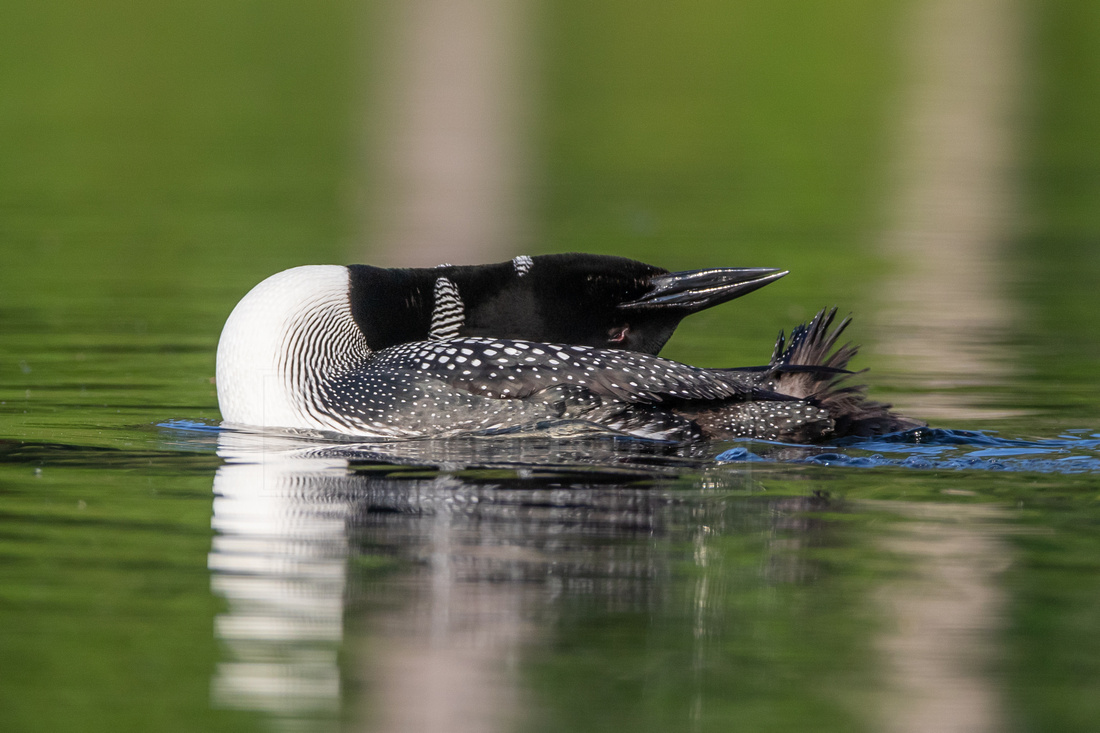 Preening also involves running their bill through their feathers to clean them and spread the oil. Note the chick watching and mimicking - he's learning how to loon. 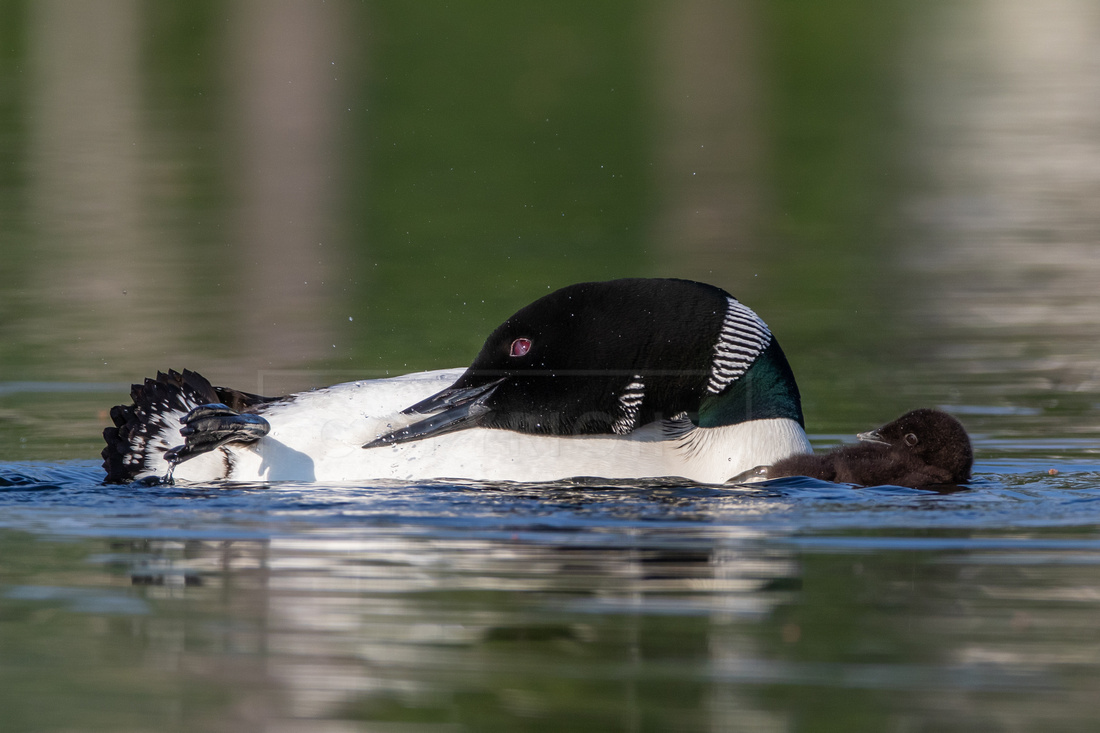 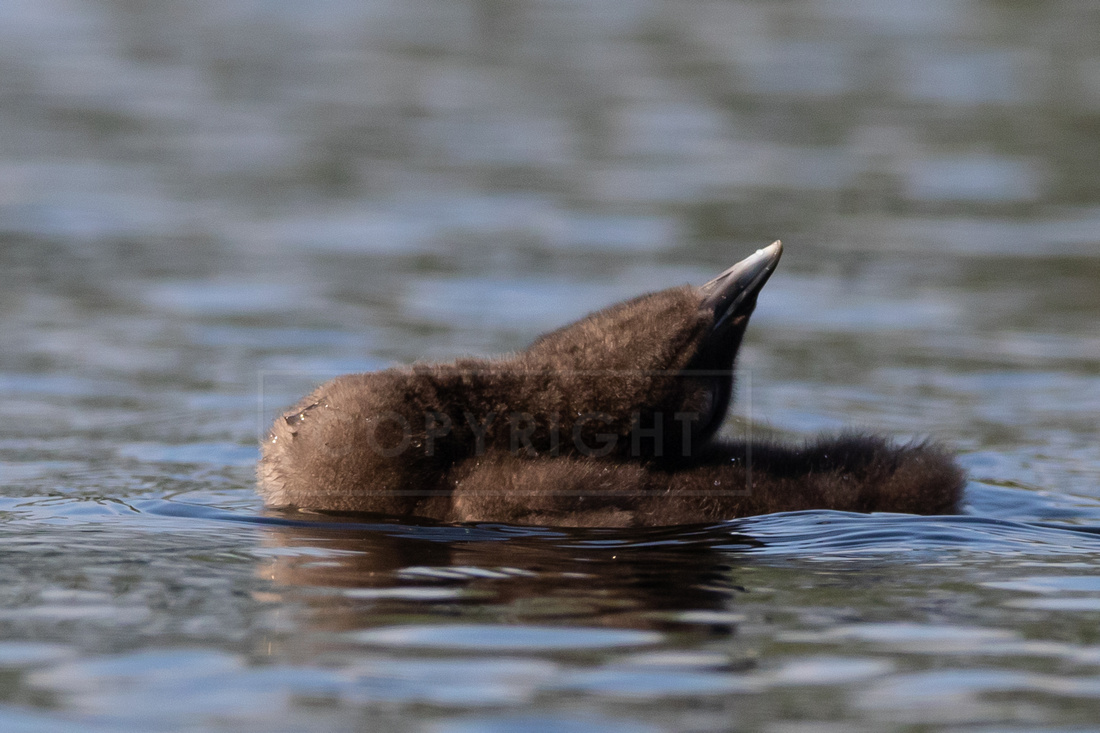 The water drops on this chick's back give a pretty clear view of how water beads up on their feathers rather than sinking in.

The chicks spent some time working their wings. 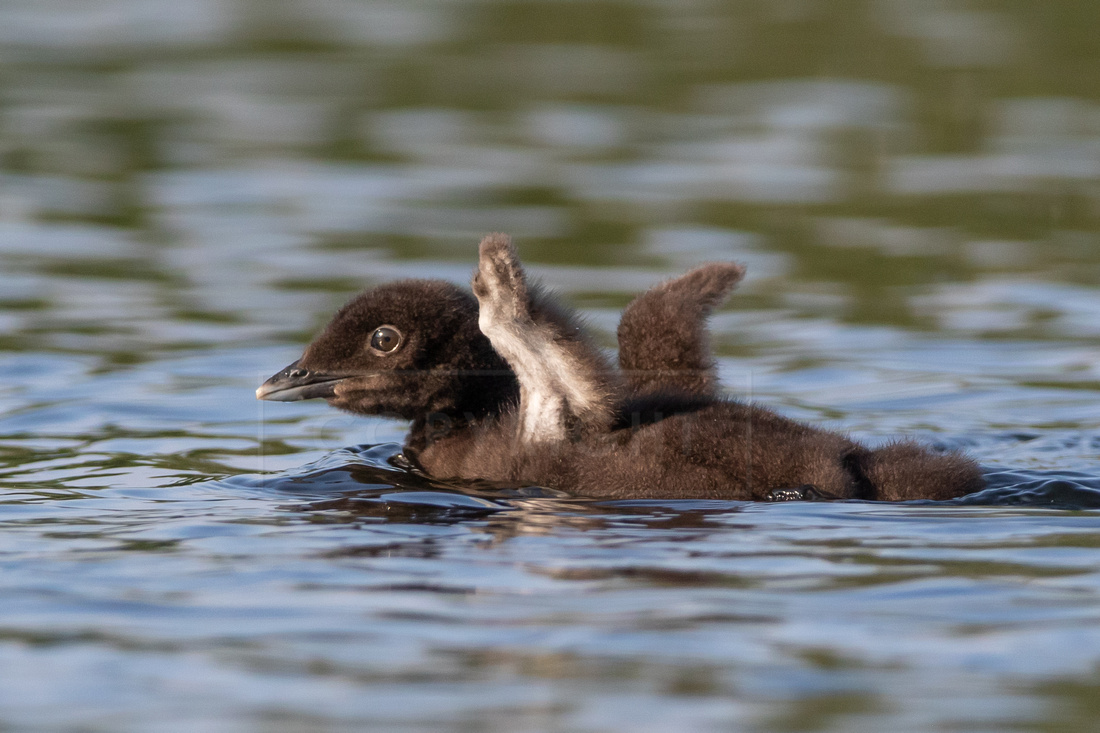 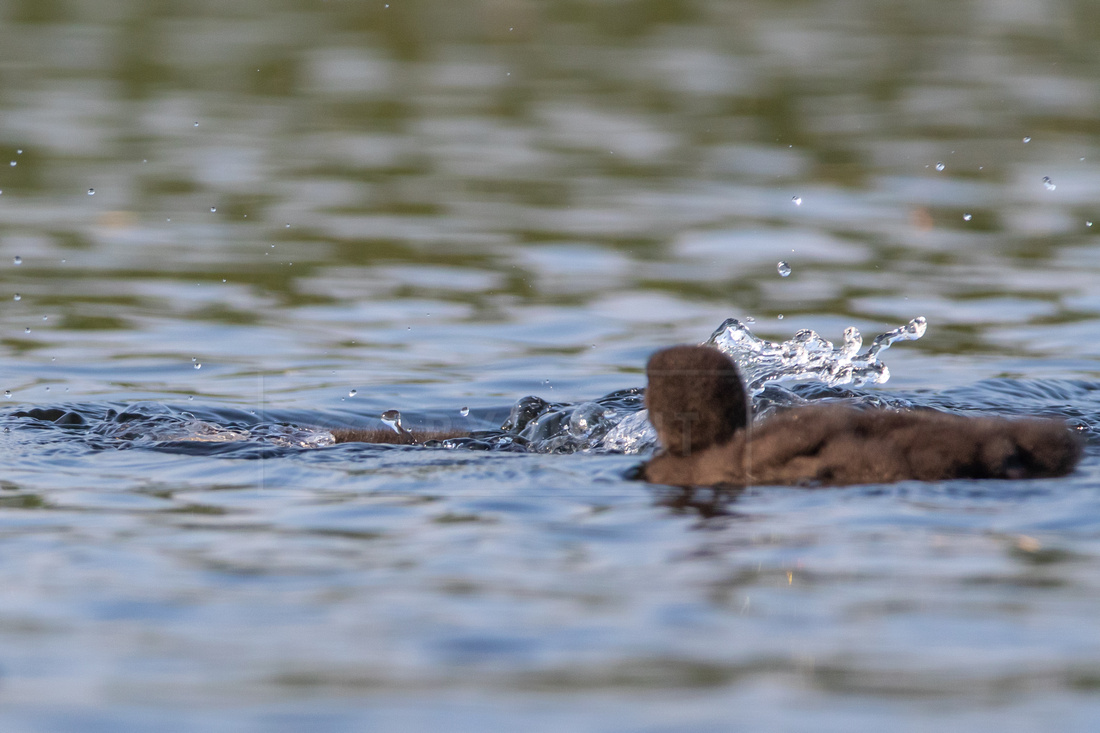 The loons had good timing. As it was getting close to time for me to leave, they finished up with breakfast and preening and headed off for first naps. 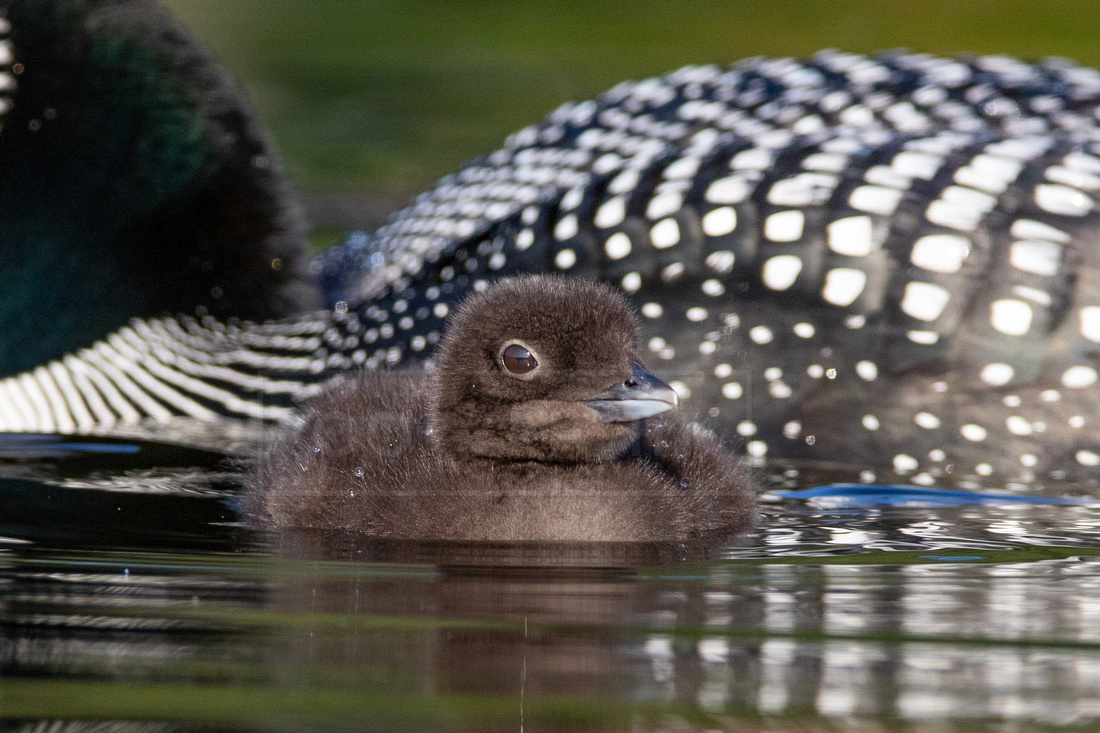