Thursday started with a beautiful early summer morning. I set sail in my kayak enjoying the solitude on an Upper Valley Pond. Solitude was temporary - I soon realized that a mouse had stowed away in the kayak and was along for the ride. He must have climbed aboard while the kayak was sitting in the yard. He retreated back behind the bulkhead in the bow and settled in for the ride.

My goal was to check in on a pair of loons that have been on the nest for over three weeks. I'm not going to say where, over the last couple years a couple of birders following my posts have harassed the loons I've posted (and me).

When I checked the nest, there was one loon sitting peacefully on the nest, the second was resting not far from the nest. They didn't 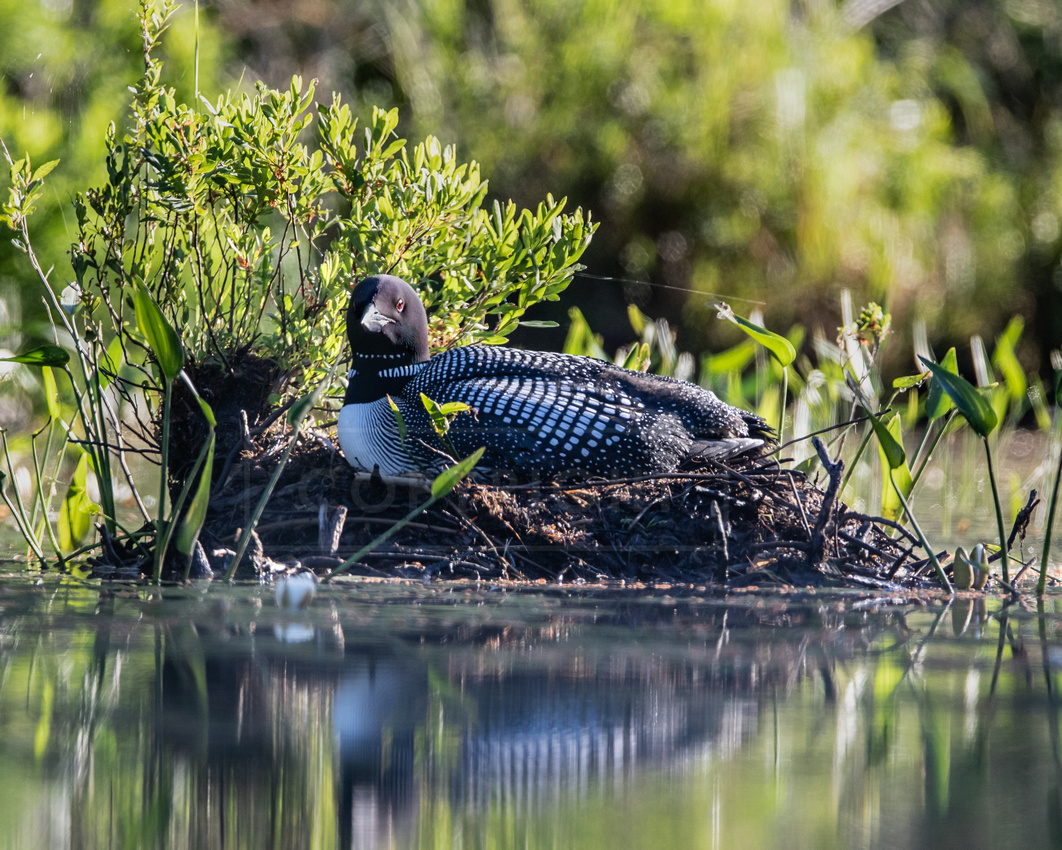 seem to be up to much, so I wandered off to see who might else be about. The usual suspects were easy to find. A sparrow belting out a song, red-winged blackbirds squawking about whatever it is that makes them squawk, grackle fledglings chasing mom around demanding to be fed. Kingbirds and phoebes nabbing dragonflies, a trio of chipmunks chasing each other, interrupted by regular breaks for snacks. There didn't appear to be many exciting photo opportunities and decided I should be at my desk.  Before leaving, I figured I'd try to catch a nest exchange to see how many eggs the loons have.

My passenger ventured out from the bow, looked around a bit and decided he was better off tucked away.

My timing was good for the loons. As I got settled in the brush to watch the nest, they swapped. It was quick, one left and the other immediately climbed onto the nest. 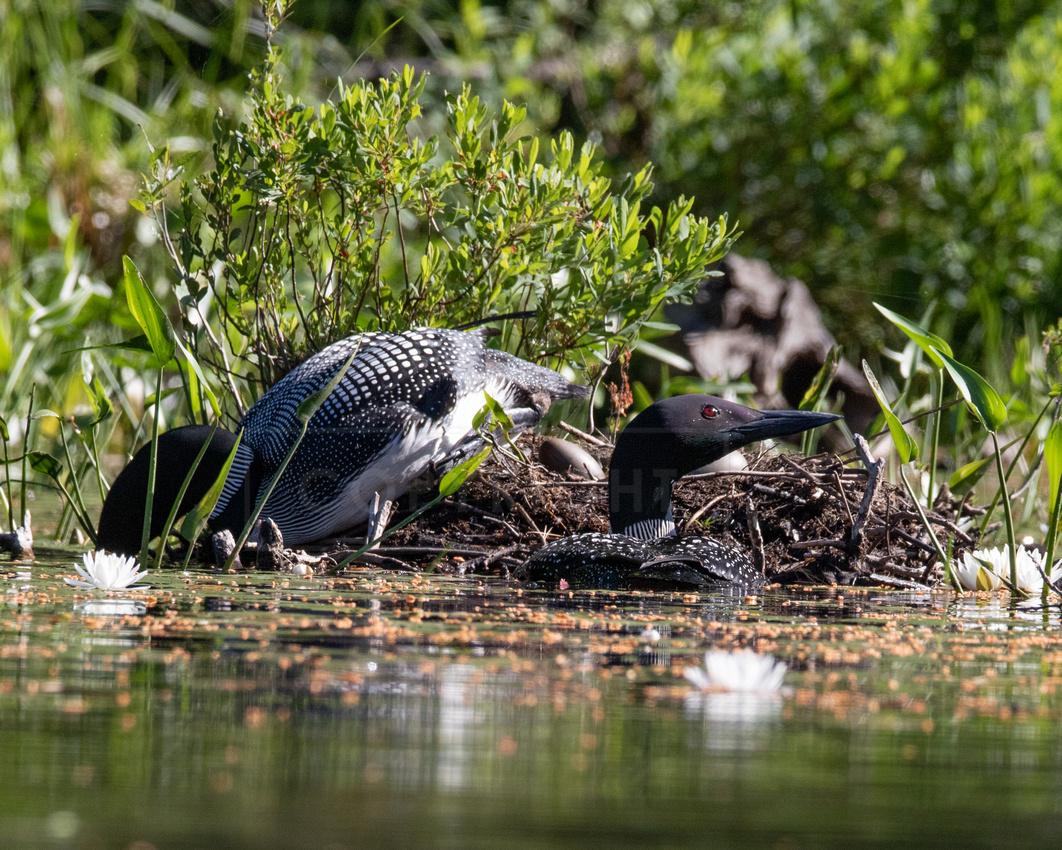 The exchange was quick enough that I didn't get a good view of the eggs. I saw only one egg and was a bit disappointed. Then I noticed there was a chick in the water to the right of the nest - well hidden by the water lilies. Looking at the photos, it sure looks like there are still two intact eggs in the nest. Loons usually have only one or two, so it is likely that one is the shell from the hatched chick. We'll see in coming days. (Friday update - a second chick has hatched. The lilies in front of the nest are placed perfectly to block my view of any remaining eggs.)

After the exchange, the new nest sitter turned the eggs. 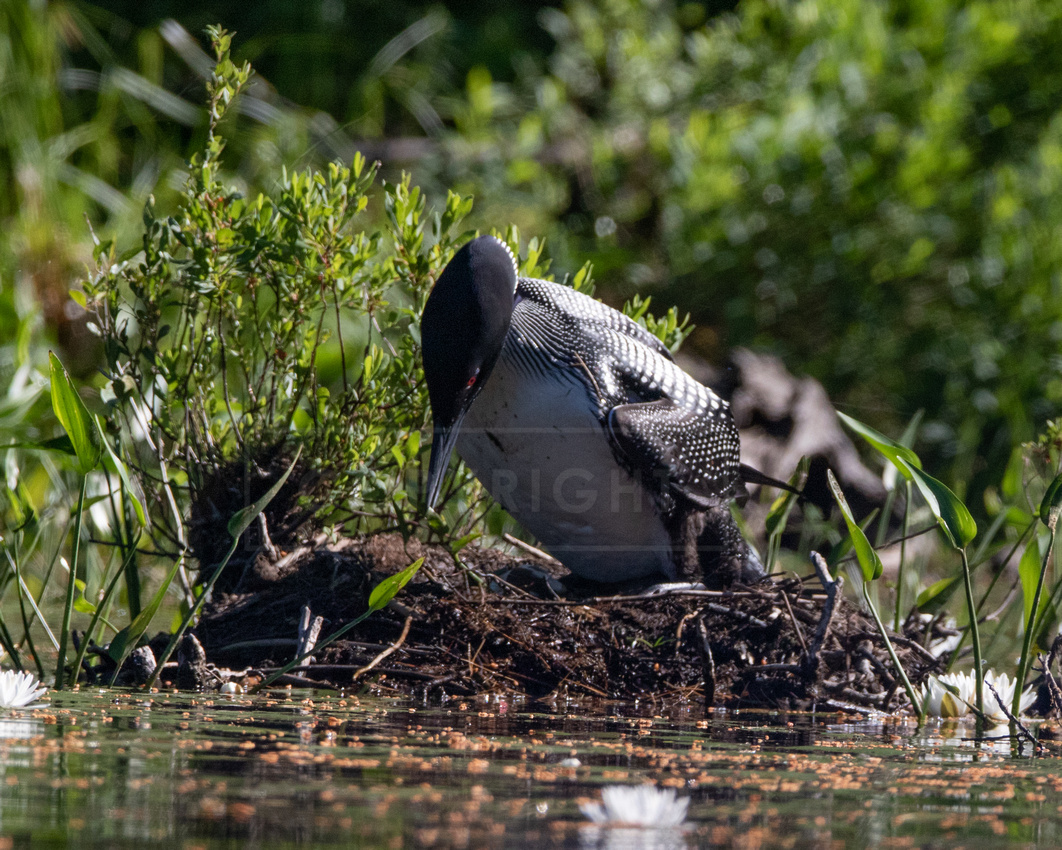 The chick in the water must have decided that the world was too much to tackle today, and climbed back into the nest. 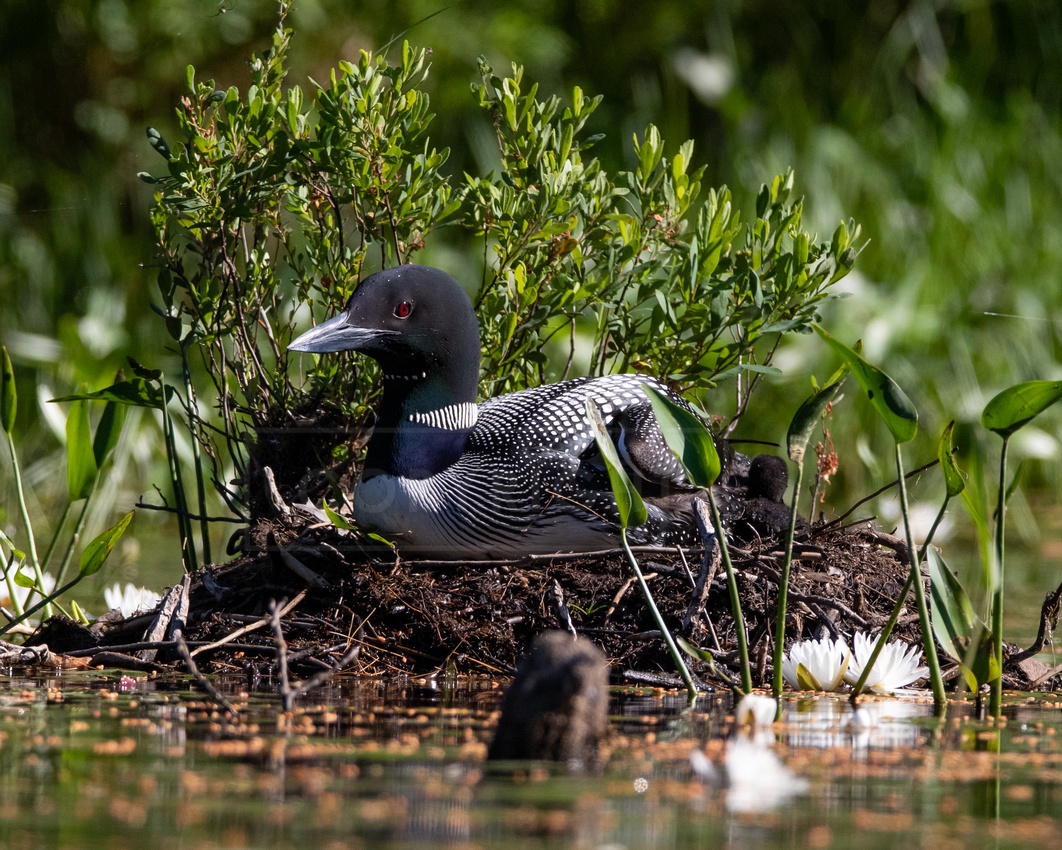 You can see it between the water lily leaves by the parent's tail below.

The parent that left the nest returned shortly with a small fish for the chick,  with a dragonfly escort. 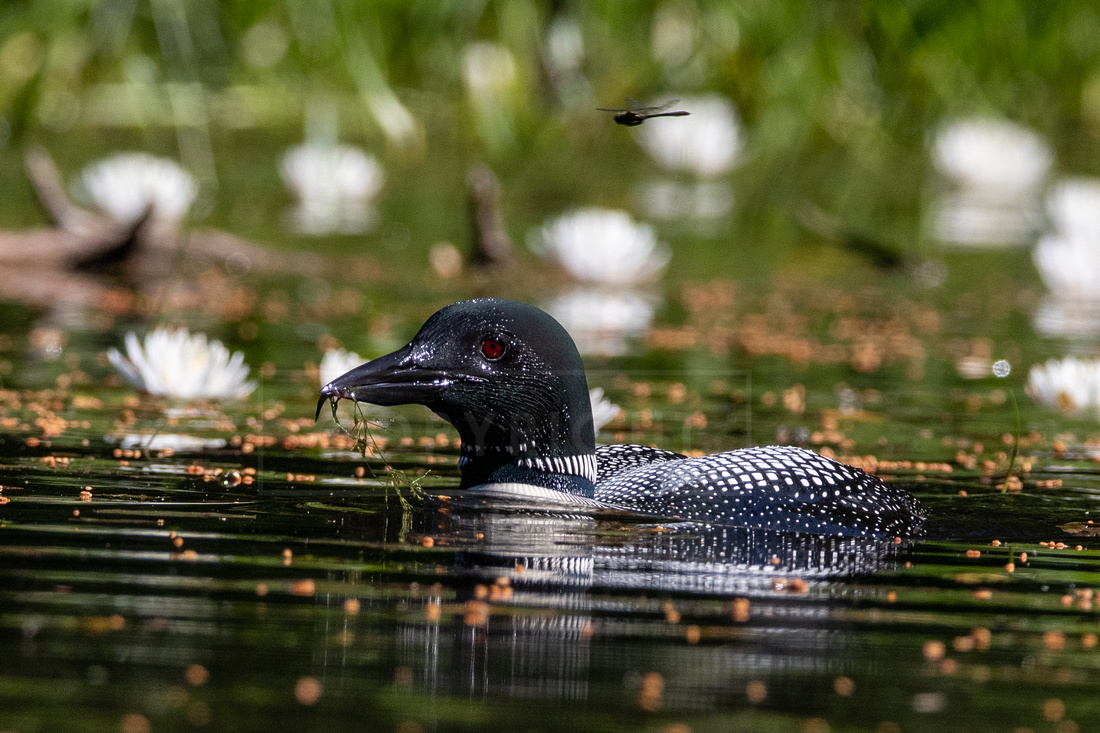 After feeding the chick, the parent wandered off to forage for his own breakfast. The parent on the nest settled in for a nap. I headed home to release the mouse. He was acceptable company, but it seemed he must have errands of his own.

Friday morning, I was up well before dawn and on the water. I beached the kayak in the cove where the nest is and settled in to wait. One parent was on the nest, the other babysitting nearby. They all slept in a bit, making me wonder I'd started so early. The mouse must not have been an early riser, he was a no show.

Eventually the parents got down to parenting. The babysitter - I suspect it was dad, he kept forgetting he had a chick on his back when he wanted to stretch or dive - started rustling up some breakfast. 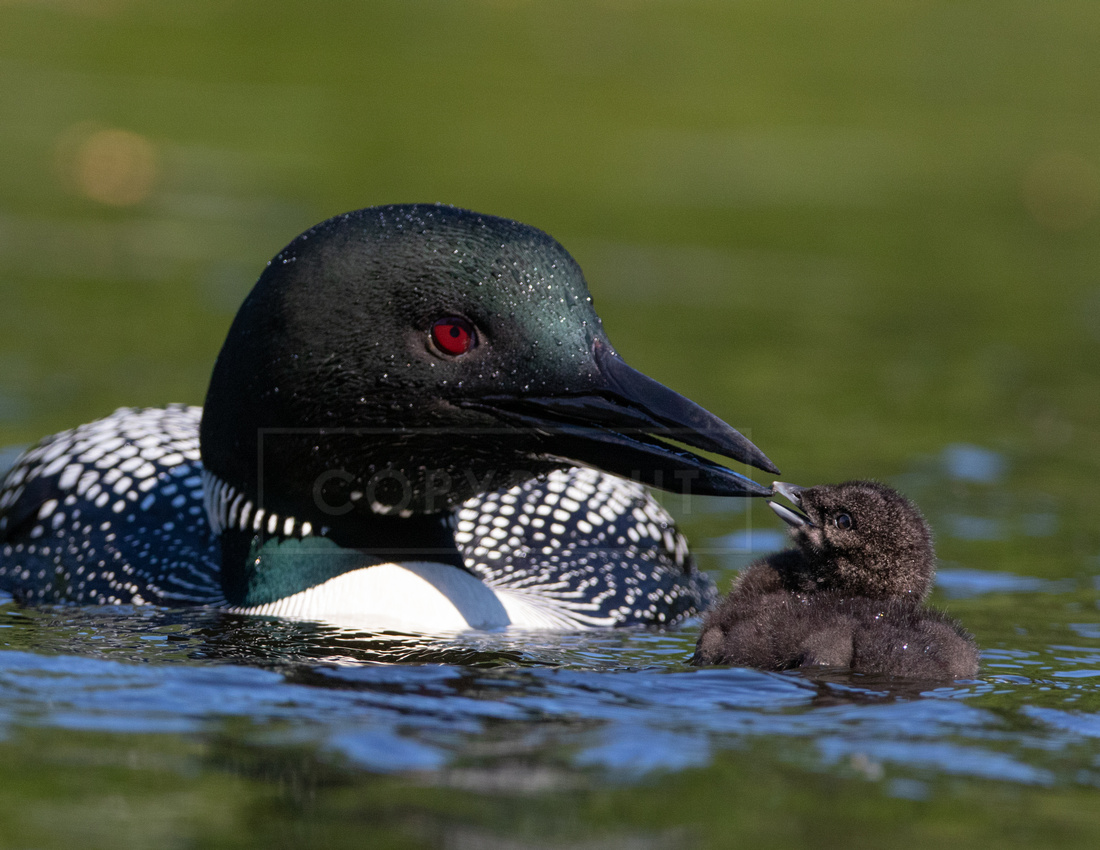 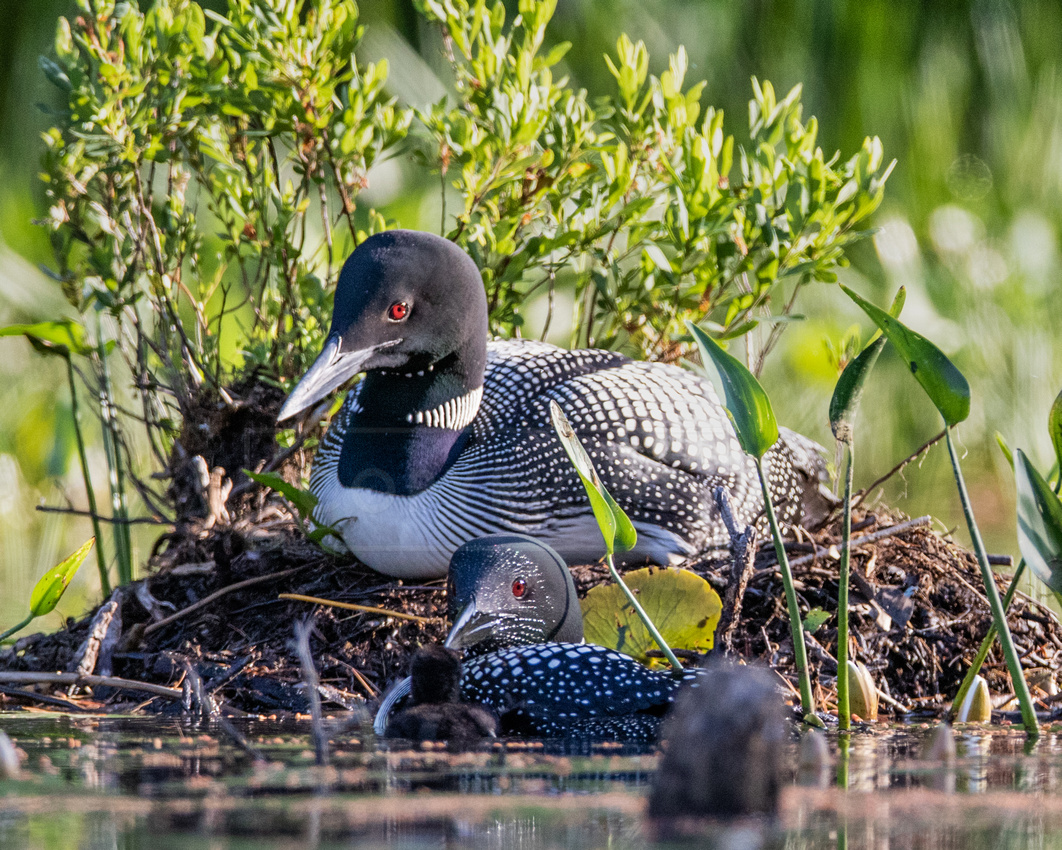 After a bit, the parents relaxed and swapped nest duty. I got a brief glimpse of a newly hatched chick in the nest. The chick was tempted off the nest with the promise of more breakfast. While waiting between servings, the chick practiced all the important loon skills. He tried out his wings: 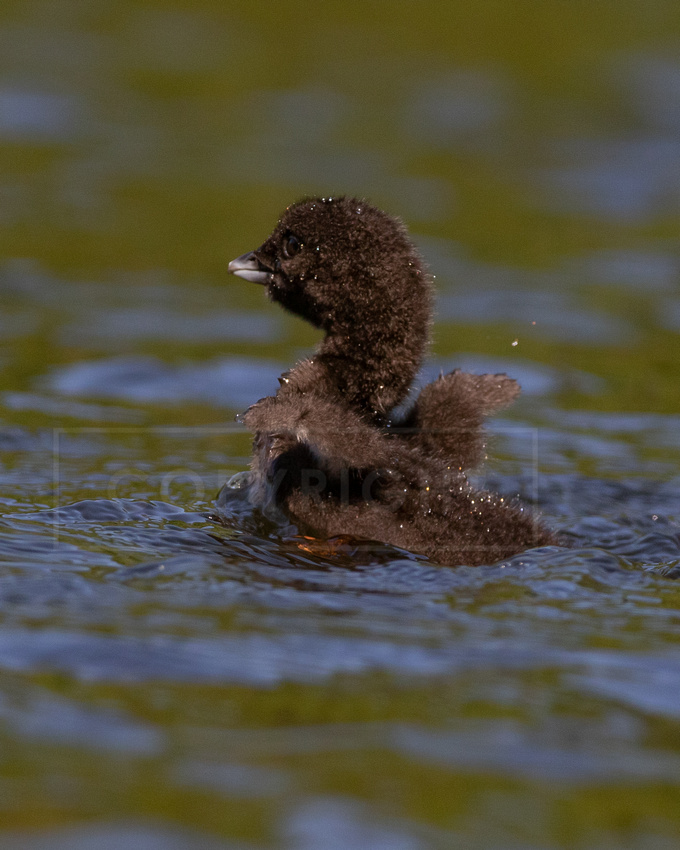 And tried to master diving: 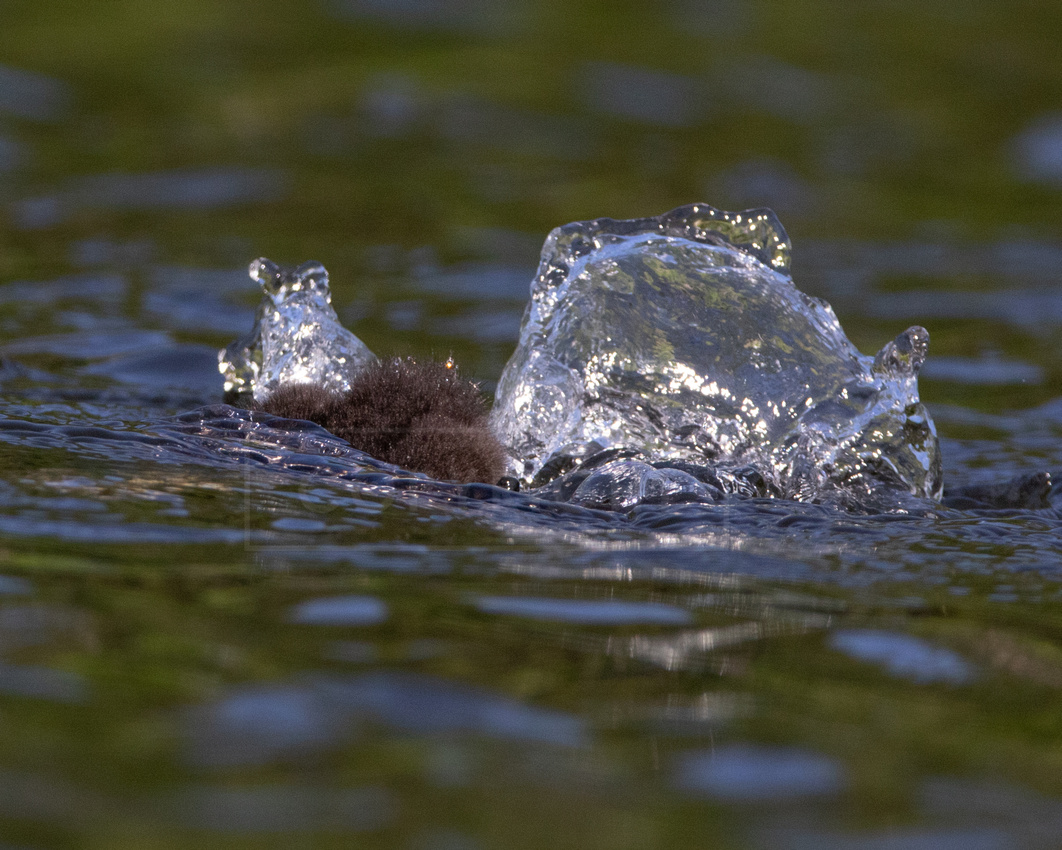 After he managed to dive, he needed to figure out how to avoid surfacing under the water lilies: 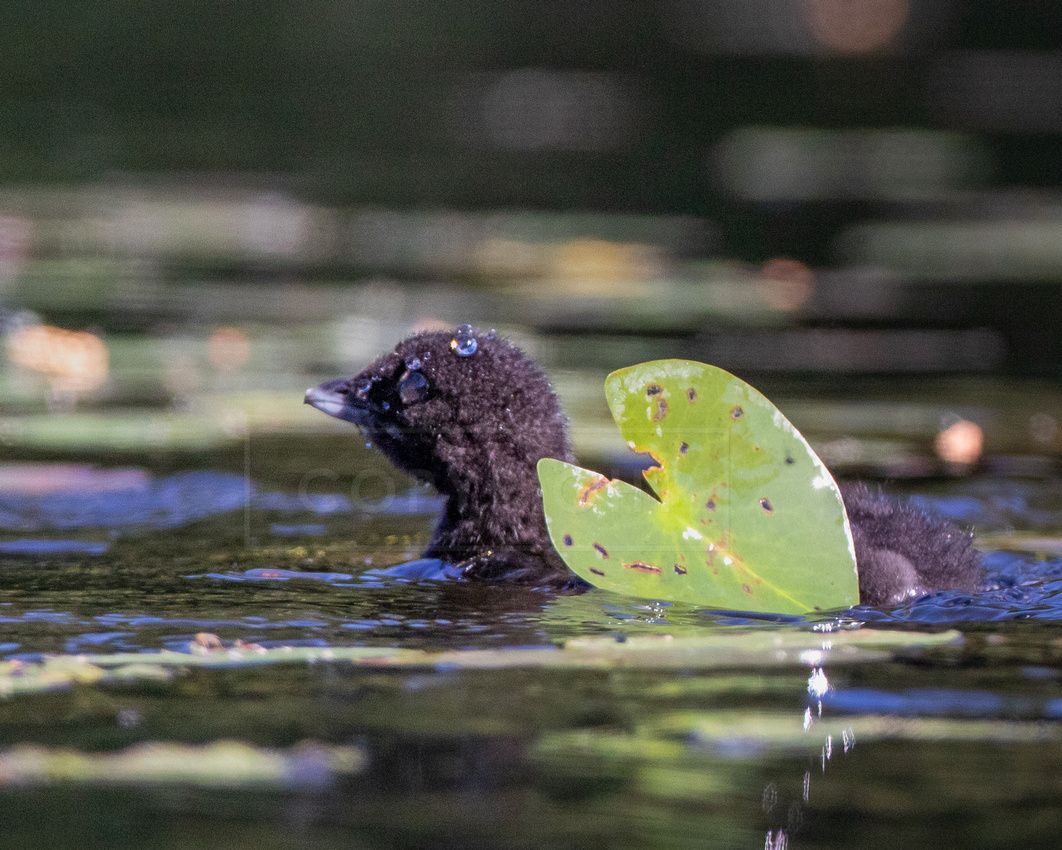 There was more excitement as the babysitter spotted a snapping turtle surfaced only ~20 feet from the chick. The parent dove, there was a commotion underwater, then the parent herd the chick away from where the turtle had been before resuming foraging.

Left along again, the chick was curious about why I was clicking and took a good look at me: 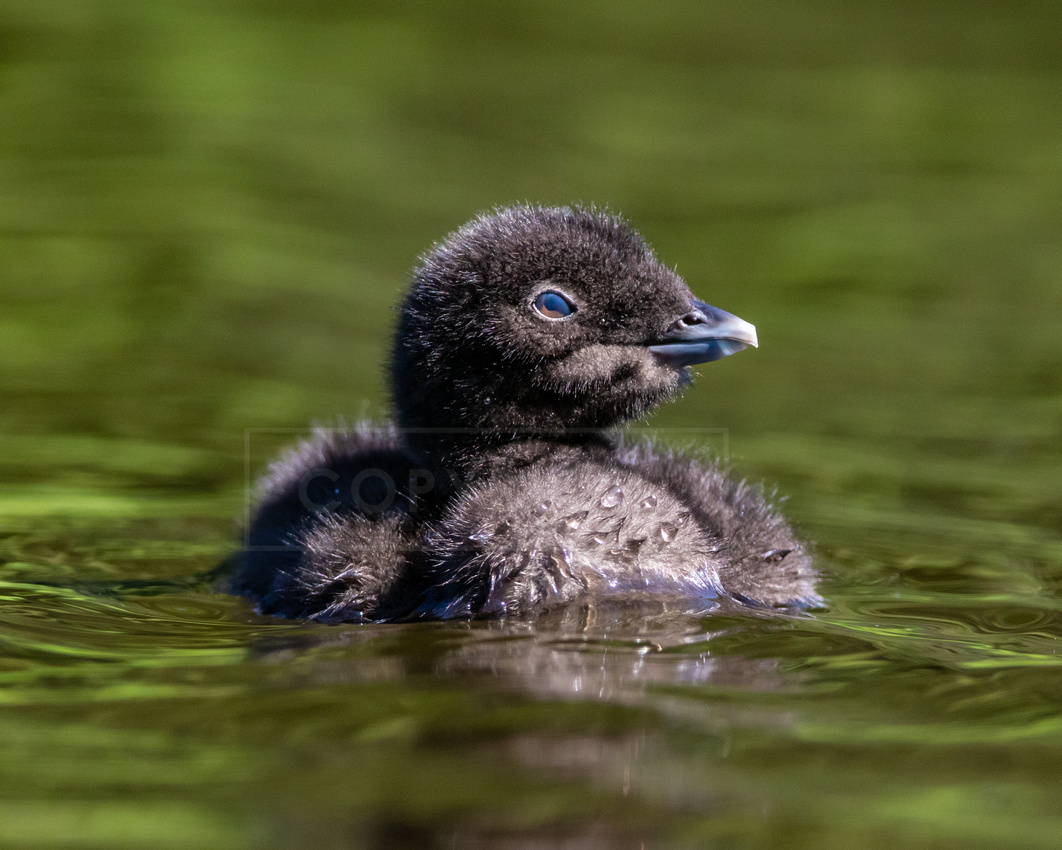 The parent foraging for second breakfast was ambitious, but unclear on the concept of volume. After several small offerings, the chick got to tackle a snack fit for a king: 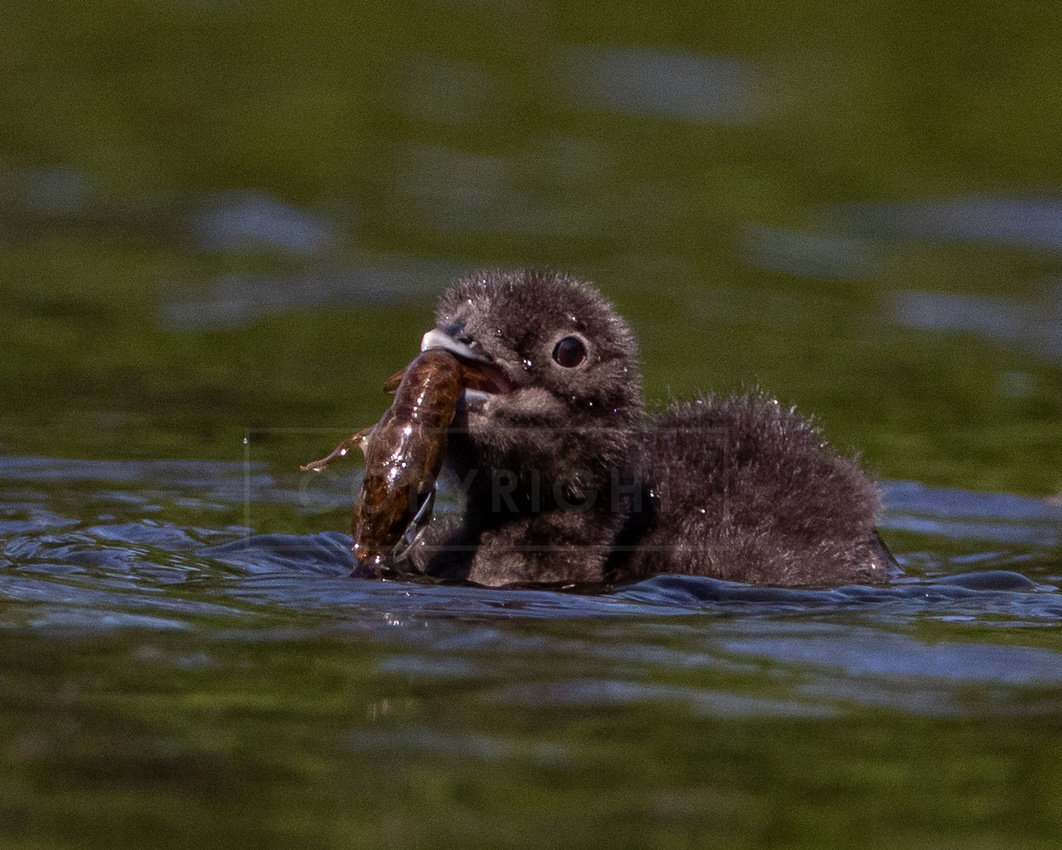 Stay tuned for more of their adventures.

Sorry about the odd line spacing. The blogging software is doing something I don't understand and don't have time to figure out right now.